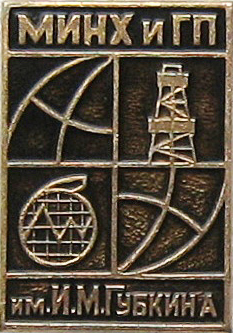 In the 80s, Moscow Institute of Petrochemical and Gas Industry named after Ivan Gubkin was a leading oil and gas educational and scientific institution with a developed infrastructure, qualified scientific staff and a high international ranking.

During these years, there was an economic downturn in the country, followed by the crisis in the oil industry. The situation in the gas industry was a bit better, its stability was ensured by the resources allocated for the development of Yamal. The need for in-depth training of specialists across the whole range of issues in the oil and gas industry required a structural reorganization of the Institute.

The classroom facilities of the Institute were constantly enlarged. In 1987 a new academic building, and in 1989 the Palace of Culture “Gubkinets” were opened. New specialized classrooms, gyms were launched. A computer center with branches in dormitories, and a unified computer network of the Institute was established. 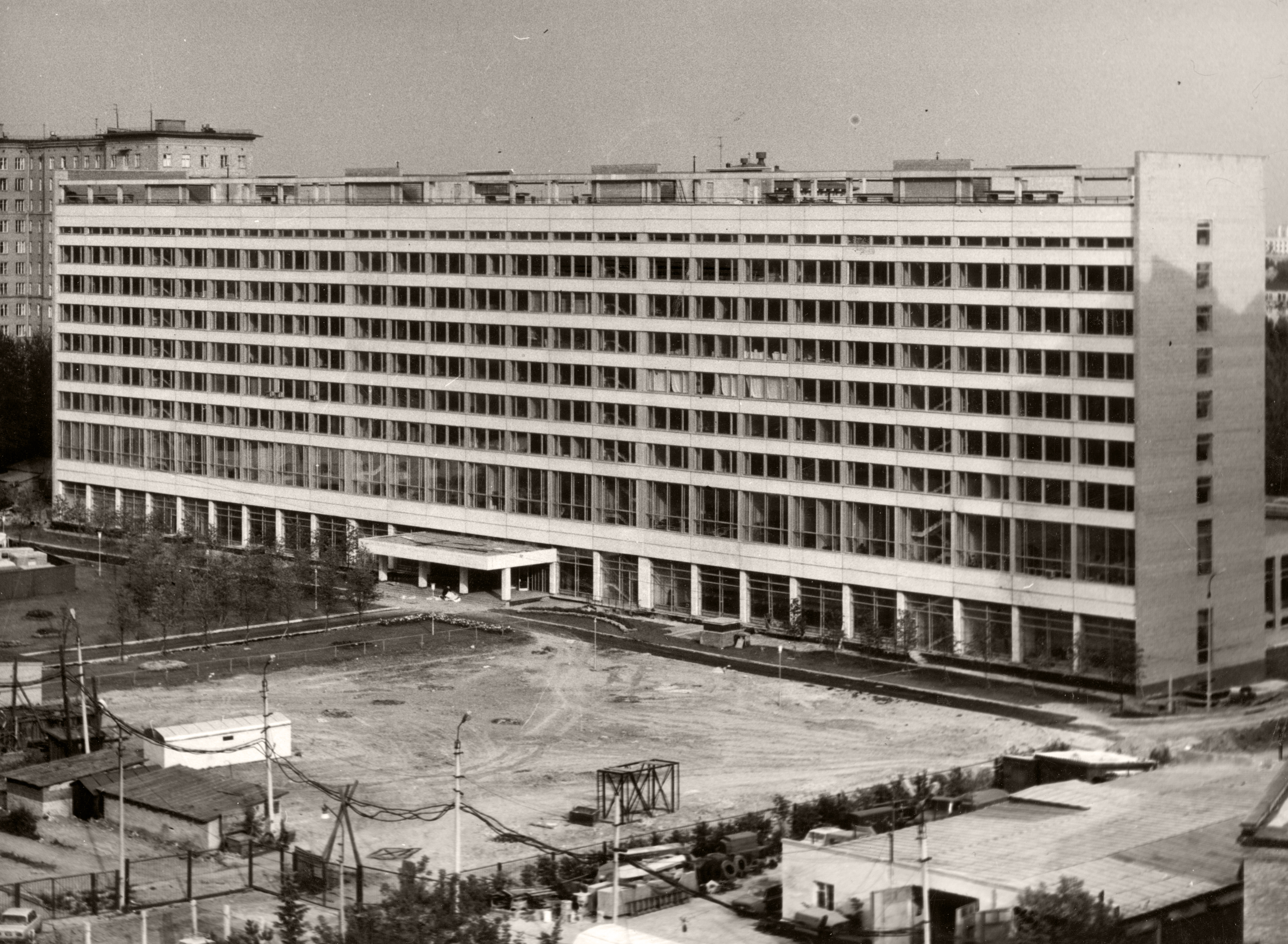 2nd academic building of the Institute 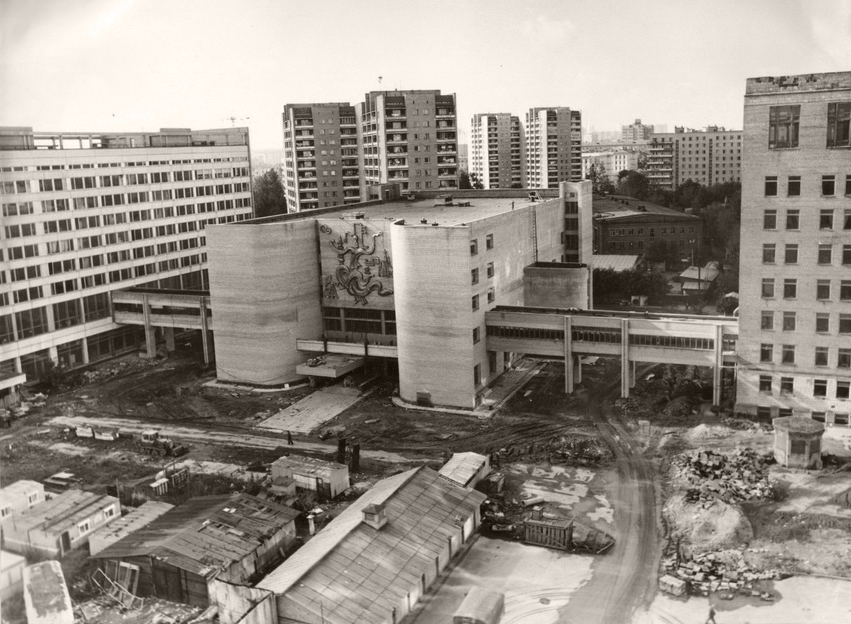 Construction of the Palace of Culture “Gubkinets”

In the early 80s, the Oil- and Gas-field Faculty was divided into two: the Faculty of Oil and Gas Field Development and the Faculty of Design, Construction and Exploitation of Pipeline Transport Systems. The structure of territorial faculties changed as well. In connection with the discovery of gas deposits in the Orenburg region and the Caspian basin, the launch of a production complex at Karachaganak gas condensate field in 1984, an evening faculty was opened in Orenburg. In 1998 the faculty received the status of a branch of the Institute. 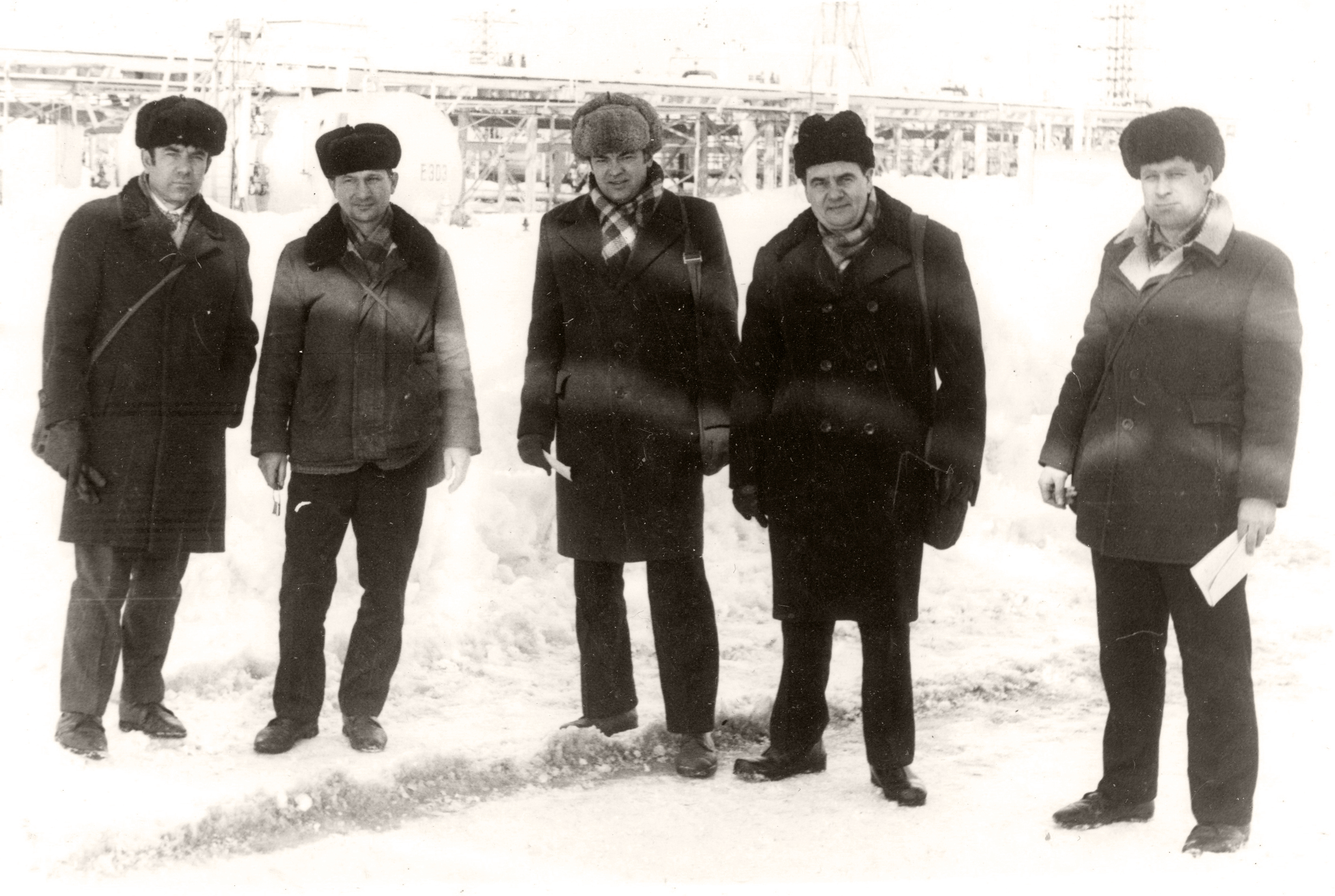 Faculty members and students of the evening faculty in Orenburg. 1986. 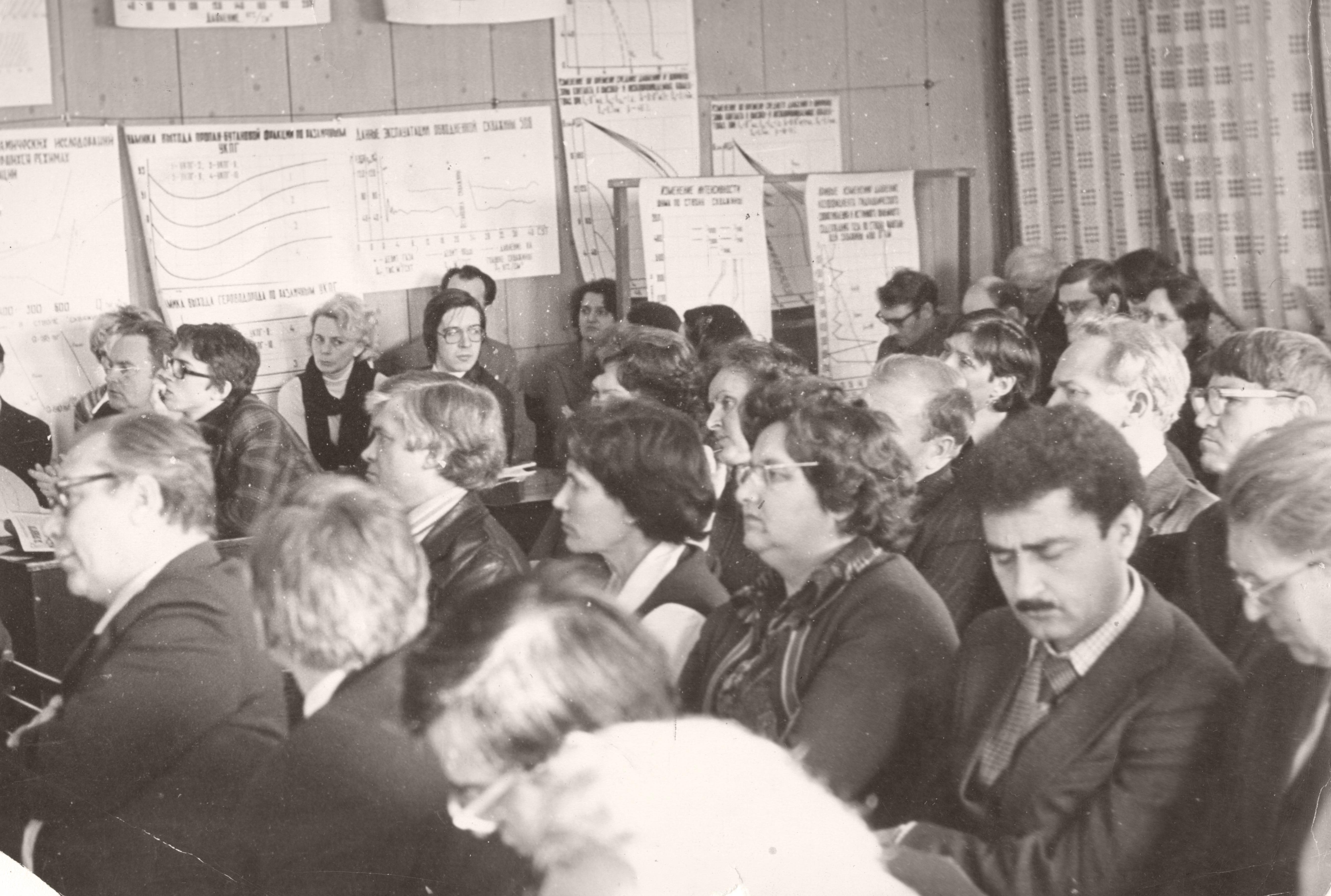 A meeting of the faculty and staff members of the evening faculty. Orenburg 1987.

At the initiative of V.N. Vinogradov, a new format of creative community of the academic and institute science was introduced. The Institute of Oil and Gas Issues of the Academy of Sciences of the USSR and the USSR Ministry of Higher Education Institutions was established on the basis of Moscow Institute of Oil and Gas named after I.M. Gubkin, and V.N. Vinogradov became its first director. 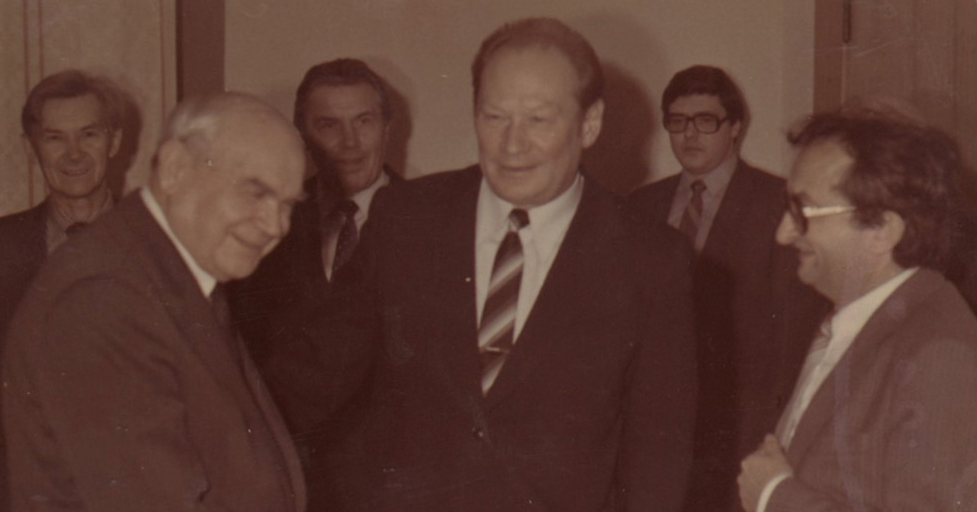 V.N. Vinogradov and N.K. Baibakov – initiators of the Institute of Oil and Gas Issues 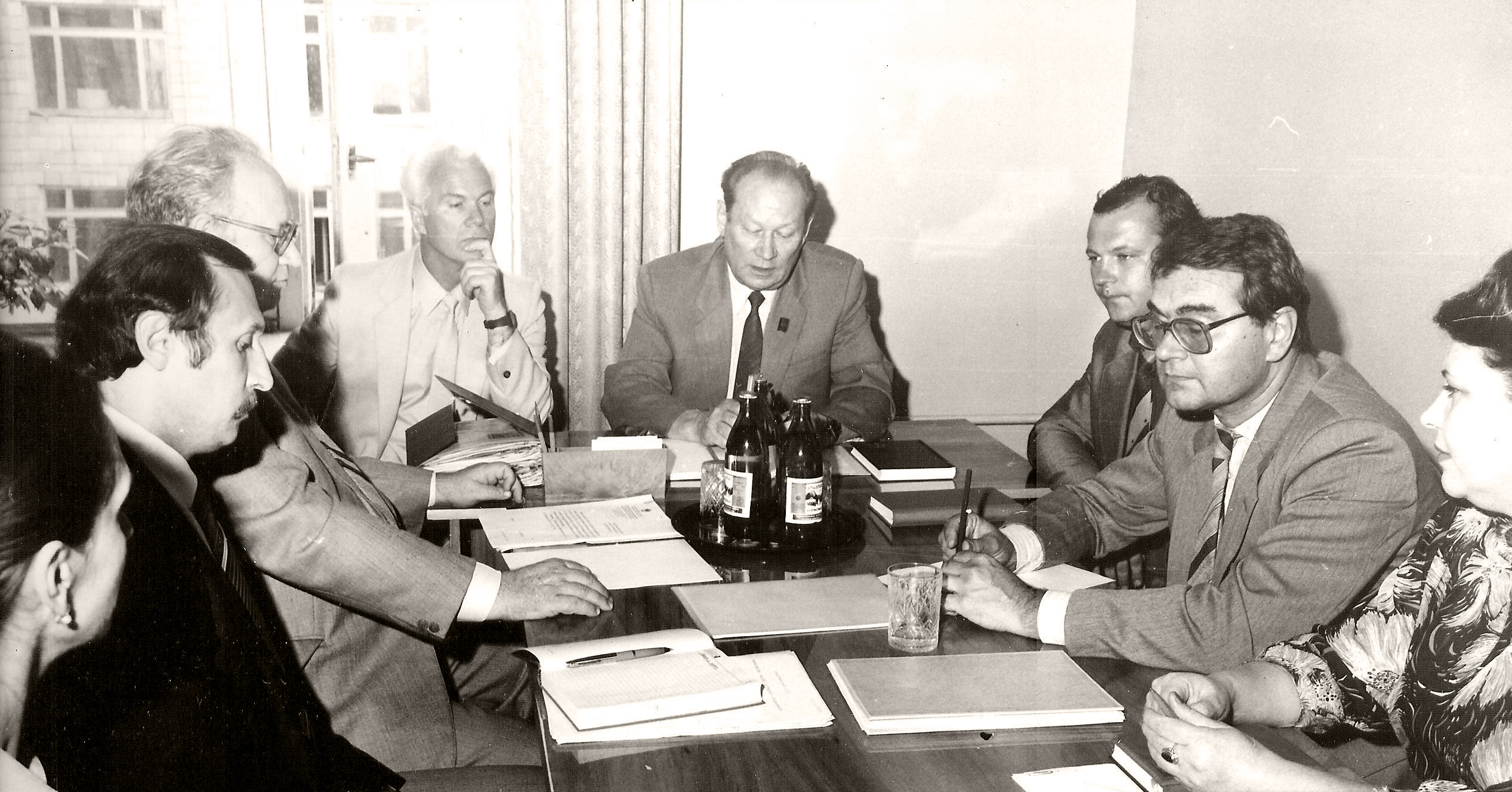 Establishment of the Institute of Oil and Gas Issues

Scientific and practical issues of oil and gas production in the most difficult conditions were particularly relevant in the 80s. In 1987 research groups involving 3-5 students were organized at all departments and faculties, and 49 research laboratories were created on the basis of these groups.

The scientific and pedagogical achievements of the Institute contributed to strengthening of its international reputation. In the mid-80s, 550 international students, interns, postgraduate and doctoral students studied at the Institute. At the same time, the Institute provided tremendous assistance in organizing the educational process for higher educational institutions in many countries, including Algeria, India, Romania, Iraq, Iran, Afghanistan, China, Vietnam, etc. 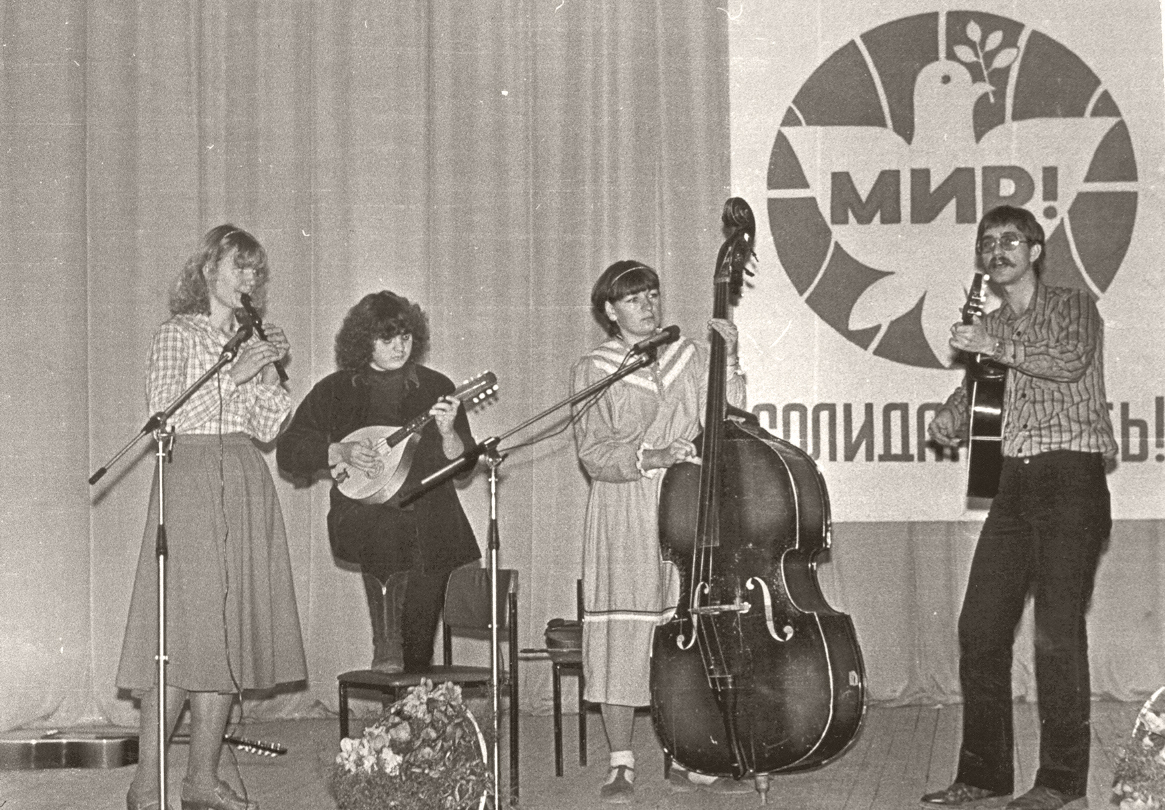 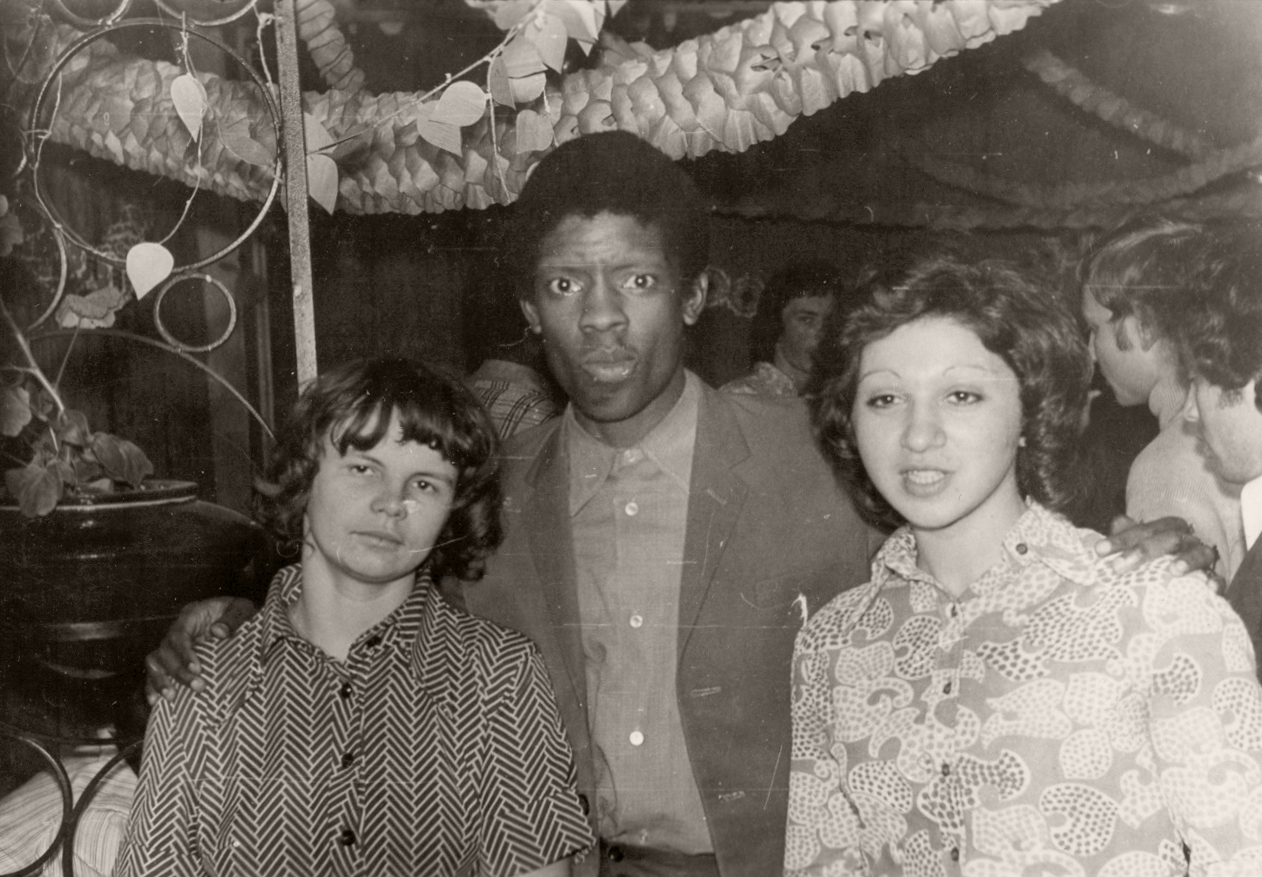 Meeting of the International Friendship Club

In 1987 the Central Interdisciplinary Institute for Continuing Education was established within Moscow Institute of Oil and Gas named after Ivan Gubkin, and V.G. Martynov was appointed to be a director. From that moment, the Institute became the basic educational institution for continuing professional education for gas industry specialists. At the same time, the Educational and Methodological Association for Higher Oil and Gas Education was organized. 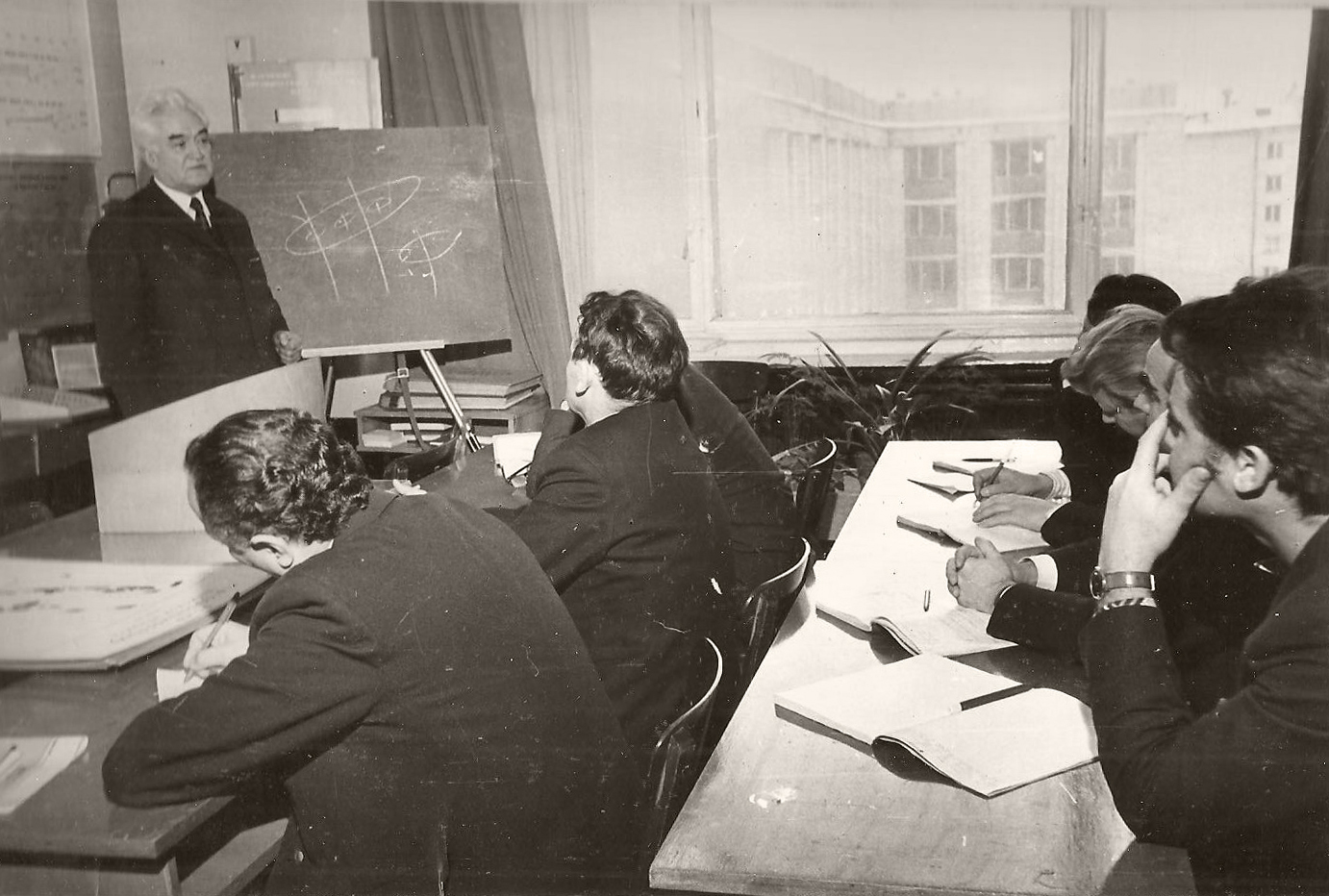 Professor A.A. Bakirov in front of students of the Central Interdisciplinary Institute for Continuing Education 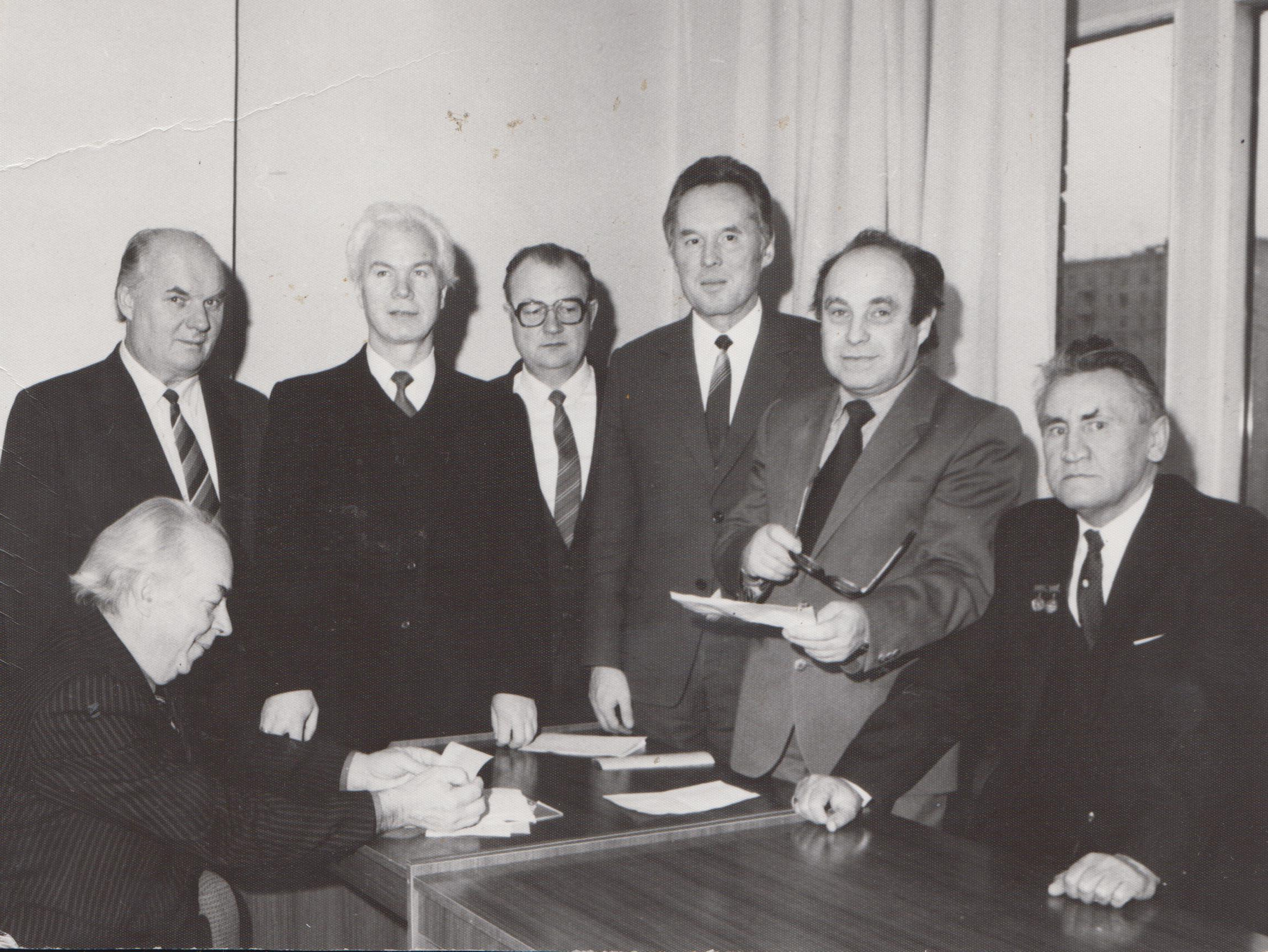 By the 90s, the Institute had trained for the country over 50 thousand specialists with higher oil and gas education. 2,800 students from 78 countries of the world underwent various types of training at the Institute – received the qualification of an engineer, undertook research traineeship, and completed advanced training courses.

After the collapse of the Soviet Union, the situation was destabilized, science and education were in deep trouble. The socio-economic and political crisis forced to reforming education, including higher education.

The leadership structure was changed. In accordance with the law on higher education and the statute of the Institute – a combination of a principle of collective leadership and unity of command – the Academy was headed by a representative elected body – the Academic Council chaired by the rector. Under the current conditions, it was necessary to lay the foundations for further improvement of the oil and gas education, to determine a long-term program for the development of the Academy. 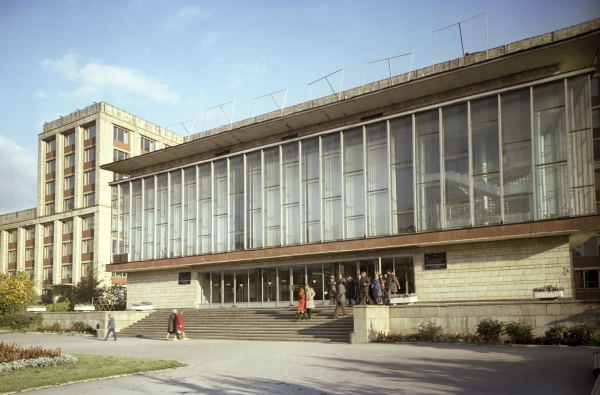 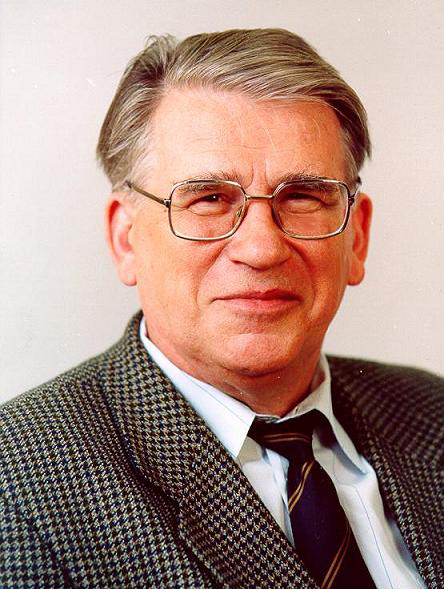 To a large extent, to solve these issues became possible due to the effort and will of the rectors of State Academy of Oil and Gas – Professor V.N. Vinogradov and his successor since 1993 Professor Albert Vladimirov, a graduate of the Faculty of Mechanical Engineering, who demonstrated outstanding research and organizational skills. A.I. Vladimirov worked for many years in the apparatus of the Central Committee of the Communist Party of the USSR and the Council of Ministers of the USSR, where he dealt with the issues of developing science and higher education in the country, and was one of the authors of the concept of reforming higher education. 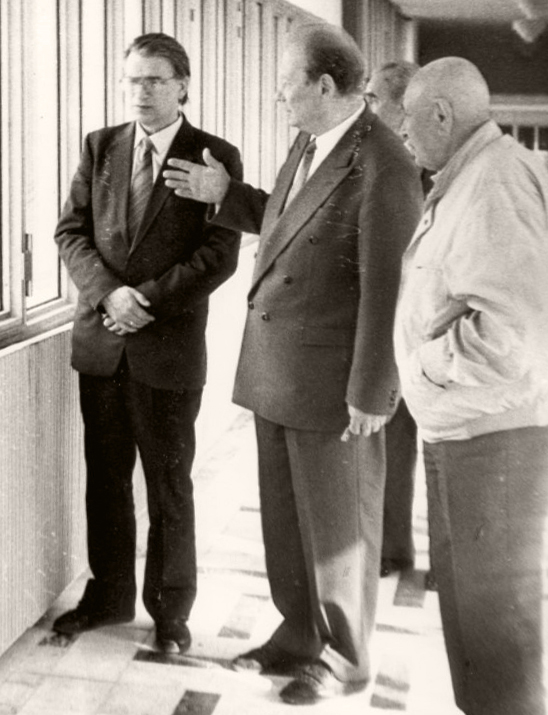 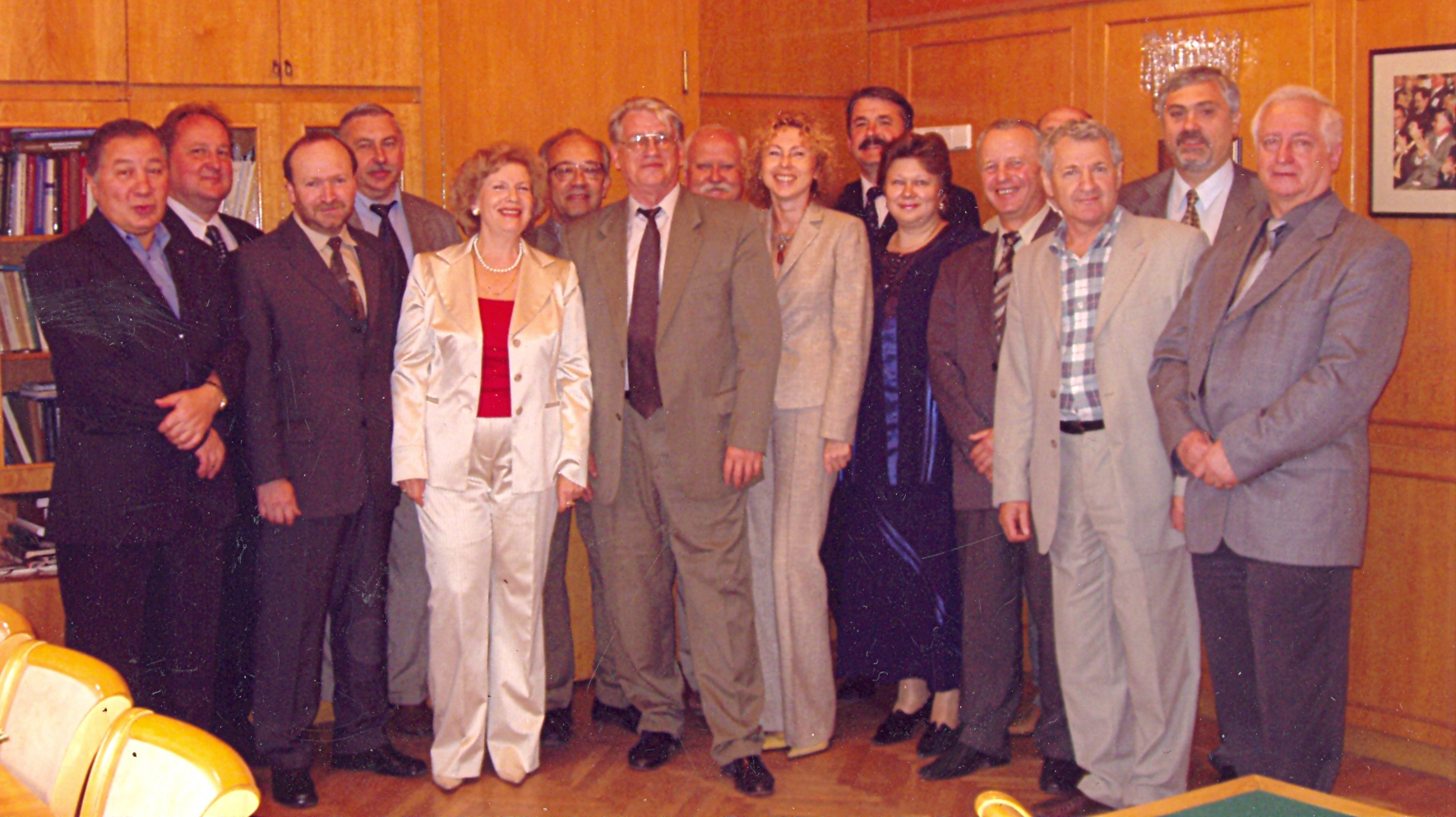 The list of program areas expanded, some were changed. New basic courses were launched to train economists and managers. In 1991, at the request of the emerging oil and gas companies, training in jurisprudence was opened at the Faculty of Economics and Management. Later the Department of Mineral Law, first in Russia, was established at the faculty. A major role in the development of the Faculty of Law was played by professors O.G. Perminov, V.F. Dunaev, A.I. Perchik, A.I. Yakovlev, associate professor O.E. Sokolsky. 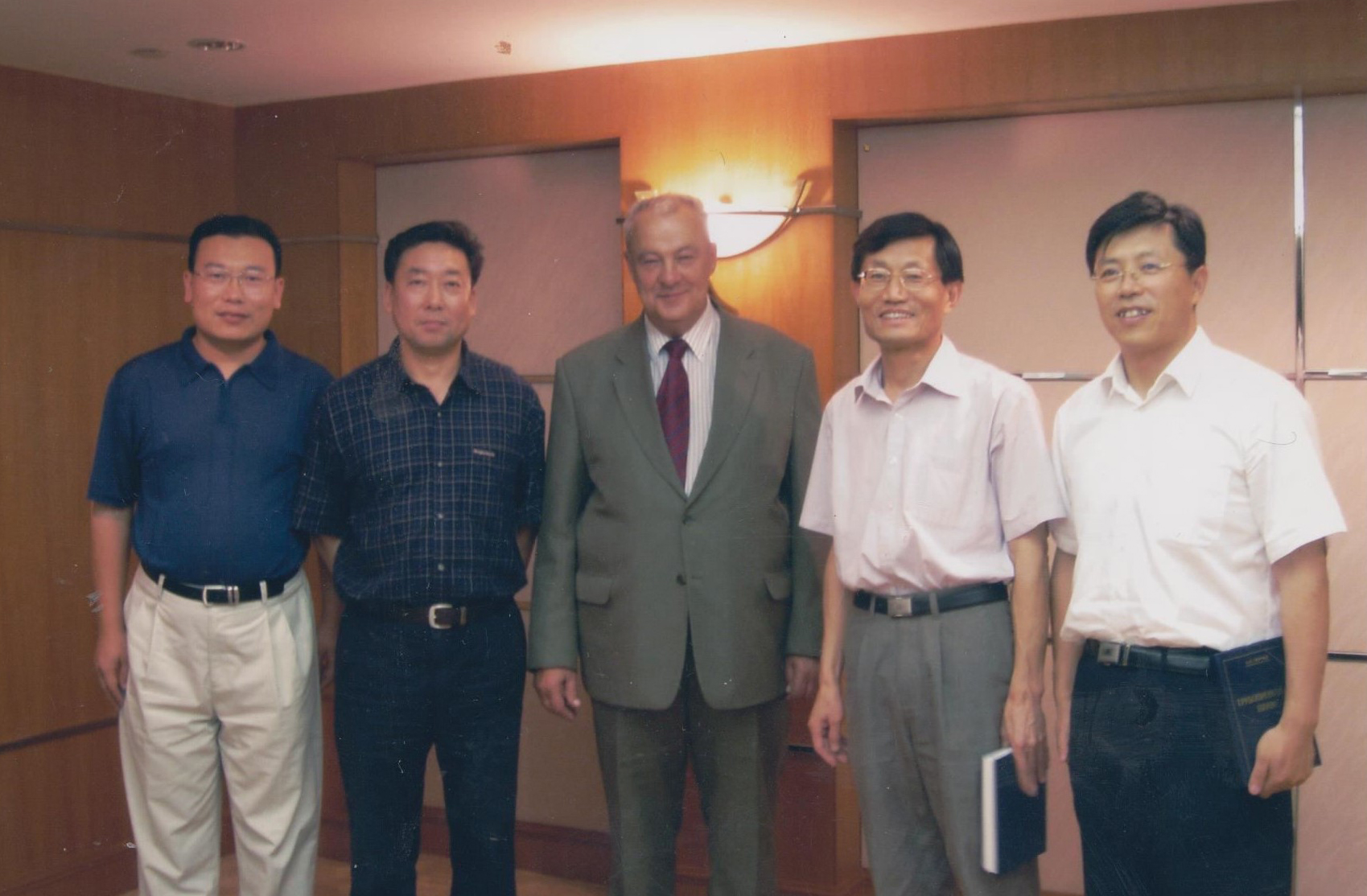 A.I. Perchik, Head of the Department of Mineral Law with interns from China 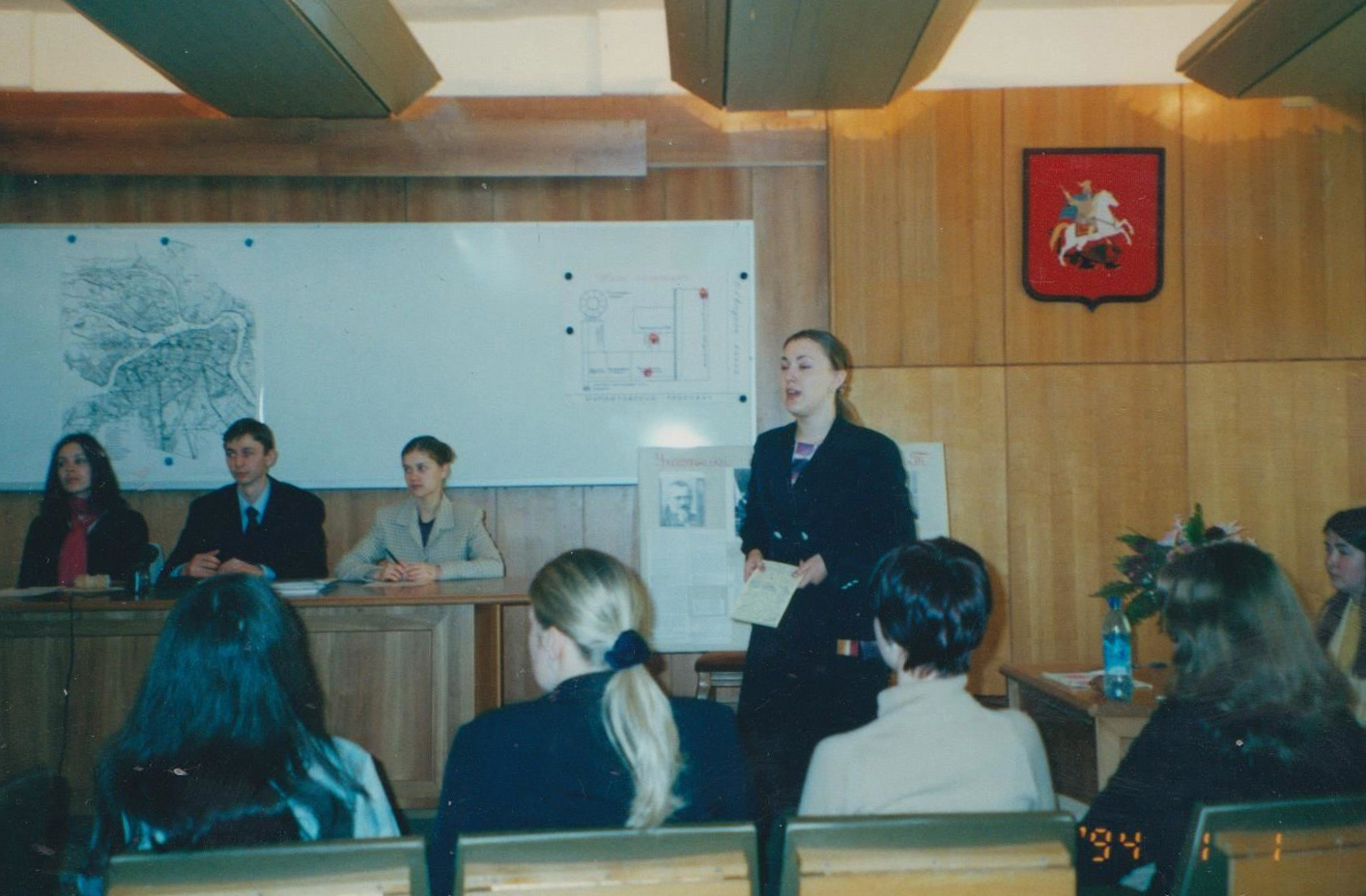 Student conference of the Faculty of Law

During these years, the Academic Council and the Academy leadership paid special attention to strengthening ties with the industry. In 1991 heads of enterprises and organizations in the oil and gas industry established the Board of Trustees of the Academy. Among the initiators were N.K. Baibakov, the former Minister of Petroleum Industry of the USSR, Chair of the State Planning Committee of the USSR, Lenin Prize laureate, Hero of Socialist Labor and Professor V.N. Vinogradov, Rector of State Academy of Oil and Gas. Professor Valery Graifer, a graduate of the Institute in 1952, one of the leaders of the country's oil industry in 70-80s, Lenin Prize laureate was elected to be the chair of the Board of Trustees. 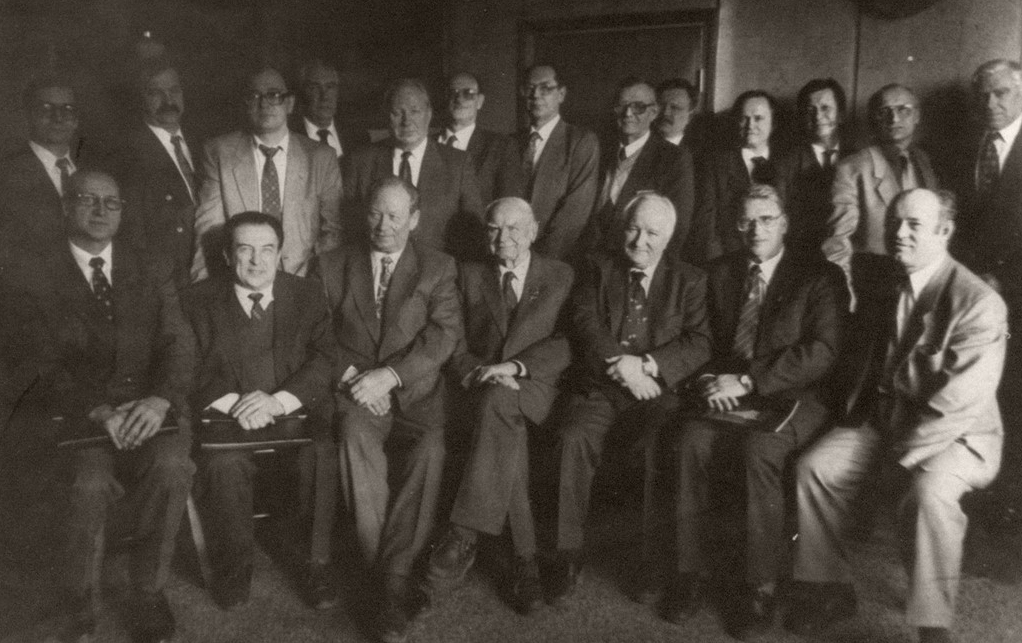 Board of Trustees of the State Academy of Oil and Gas. 1992.

All these years, the Board of Trustees provided the Academy with substantial financial and organizational support, contributed to academic training, organization of industry training, student enrollment and employment. 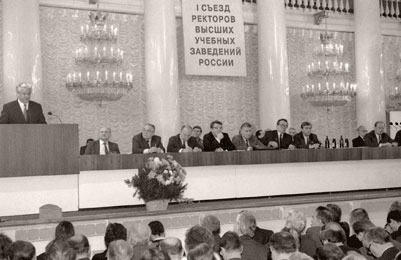 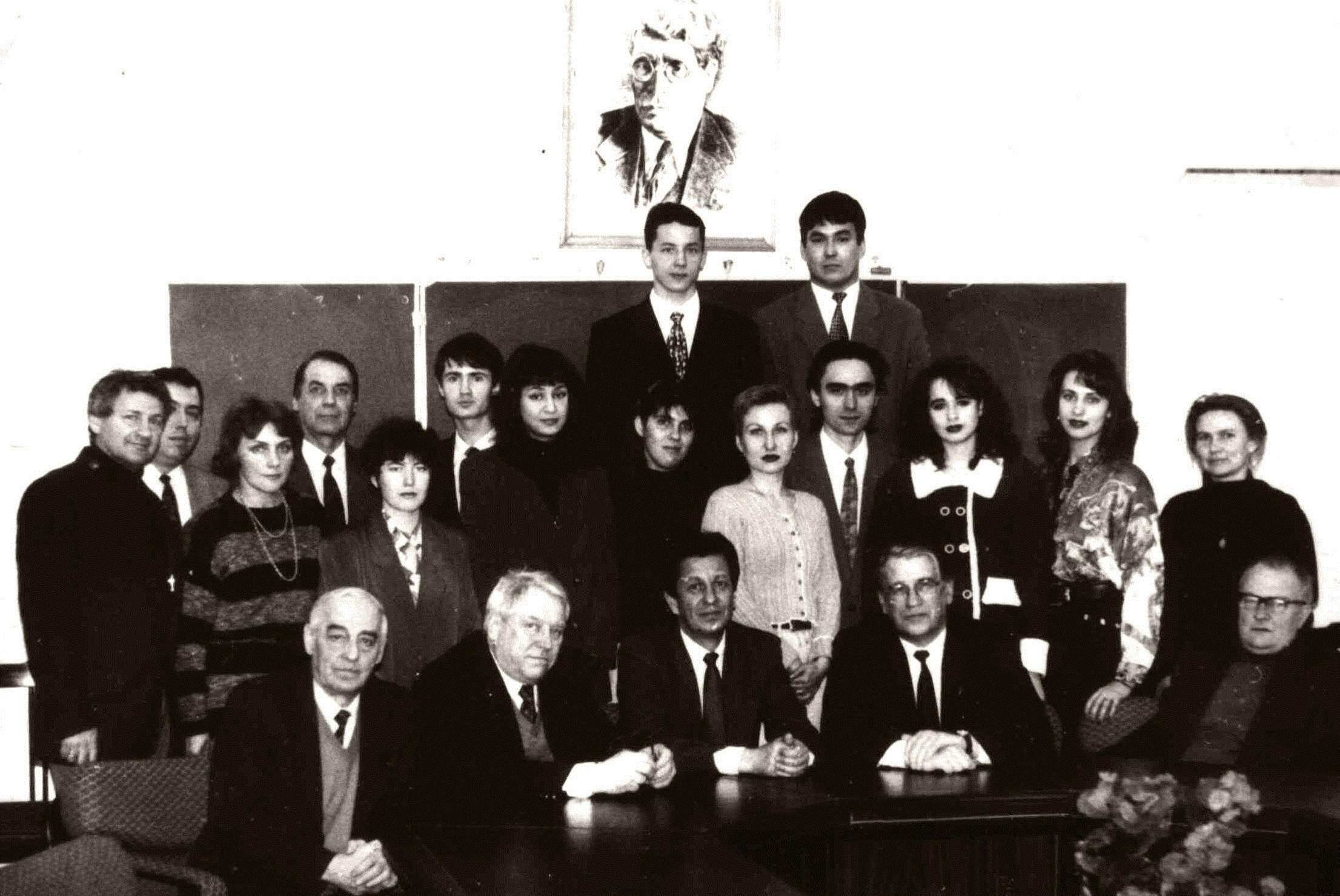 Since 1994 – 1995, the Academy started to offer training at all levels, including Bachelor’s, Specialist’s and Master’s degree programs. The first 13 Master’s level students specialized in oil and gas engineering graduated from the Academy in 1995.

In 1998 the Academy was certified as a technical institution and transformed to Gubkin Russian State Oil and Gas University. During these years, the University became a recognized center for research and the leading industry university of the country. About half of the topics researched at the University related to fundamental science. 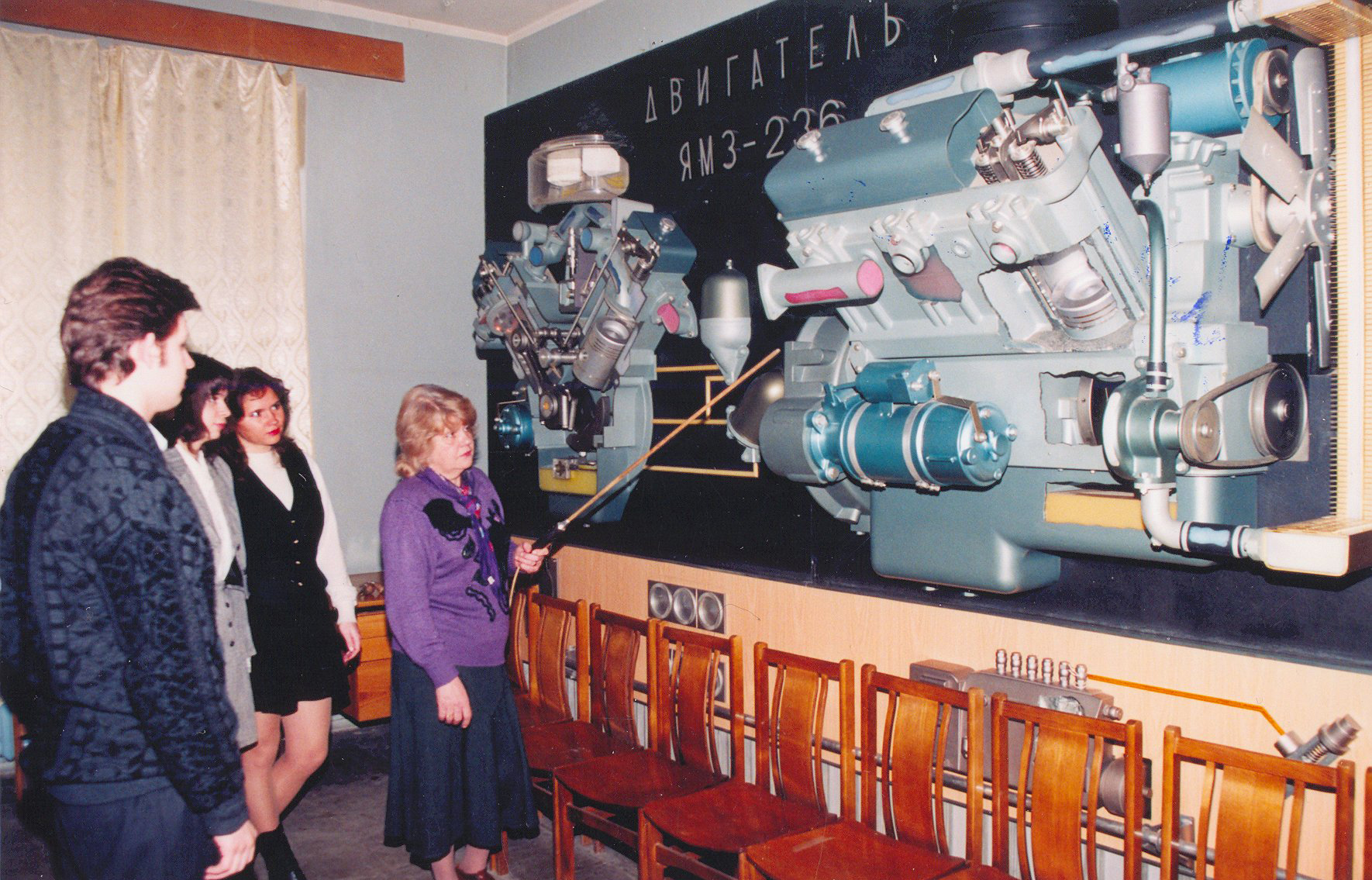 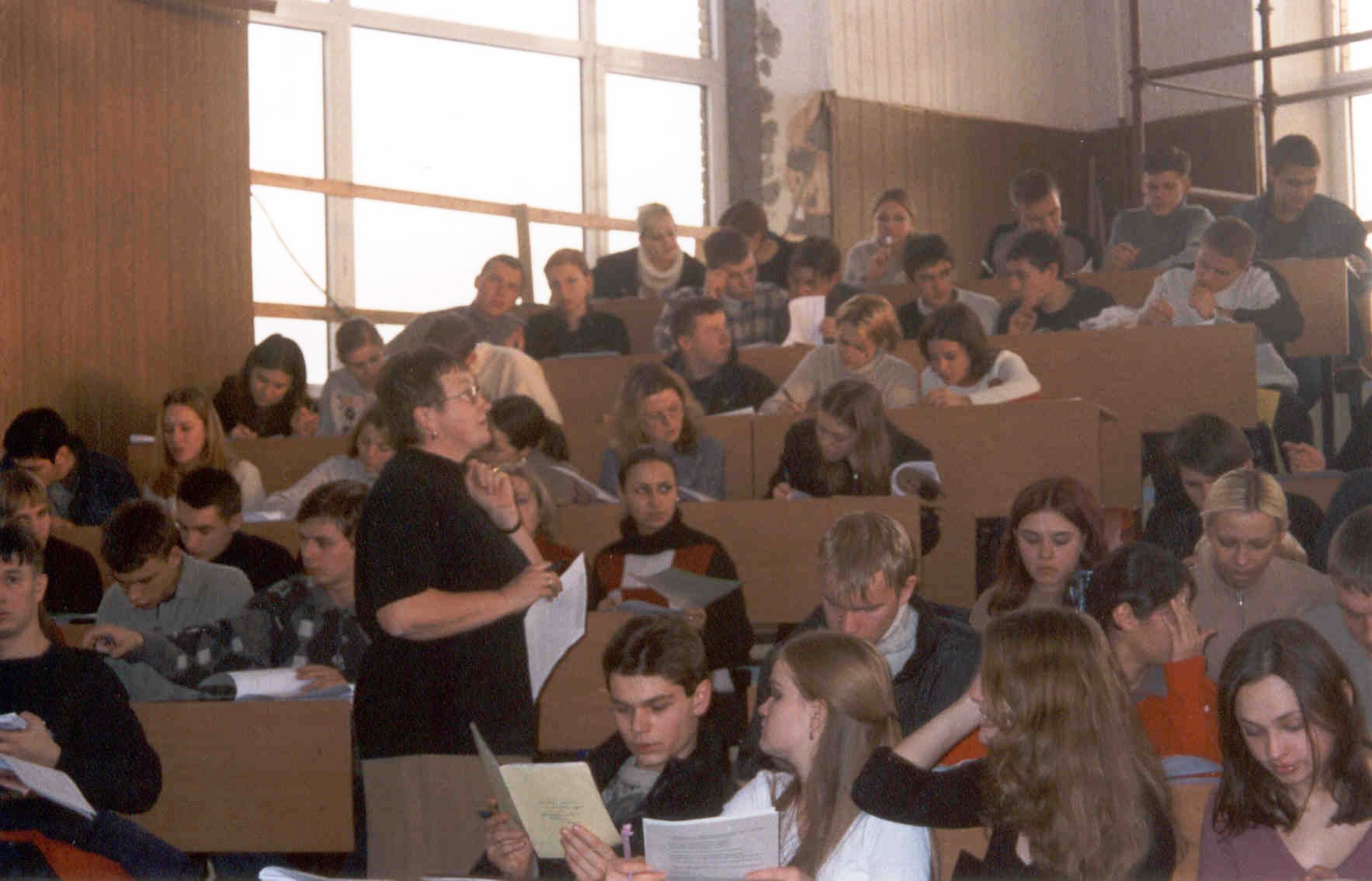 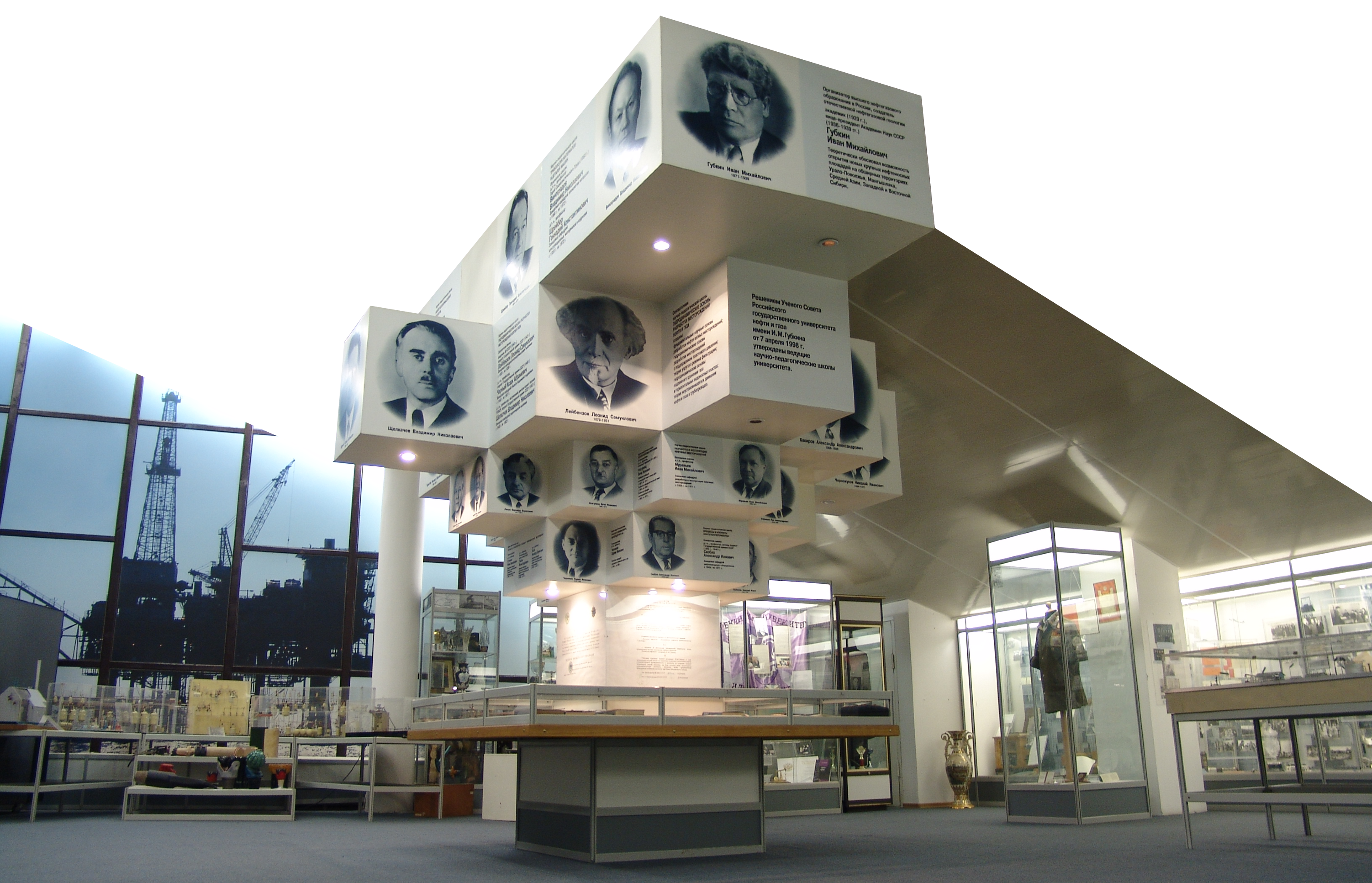 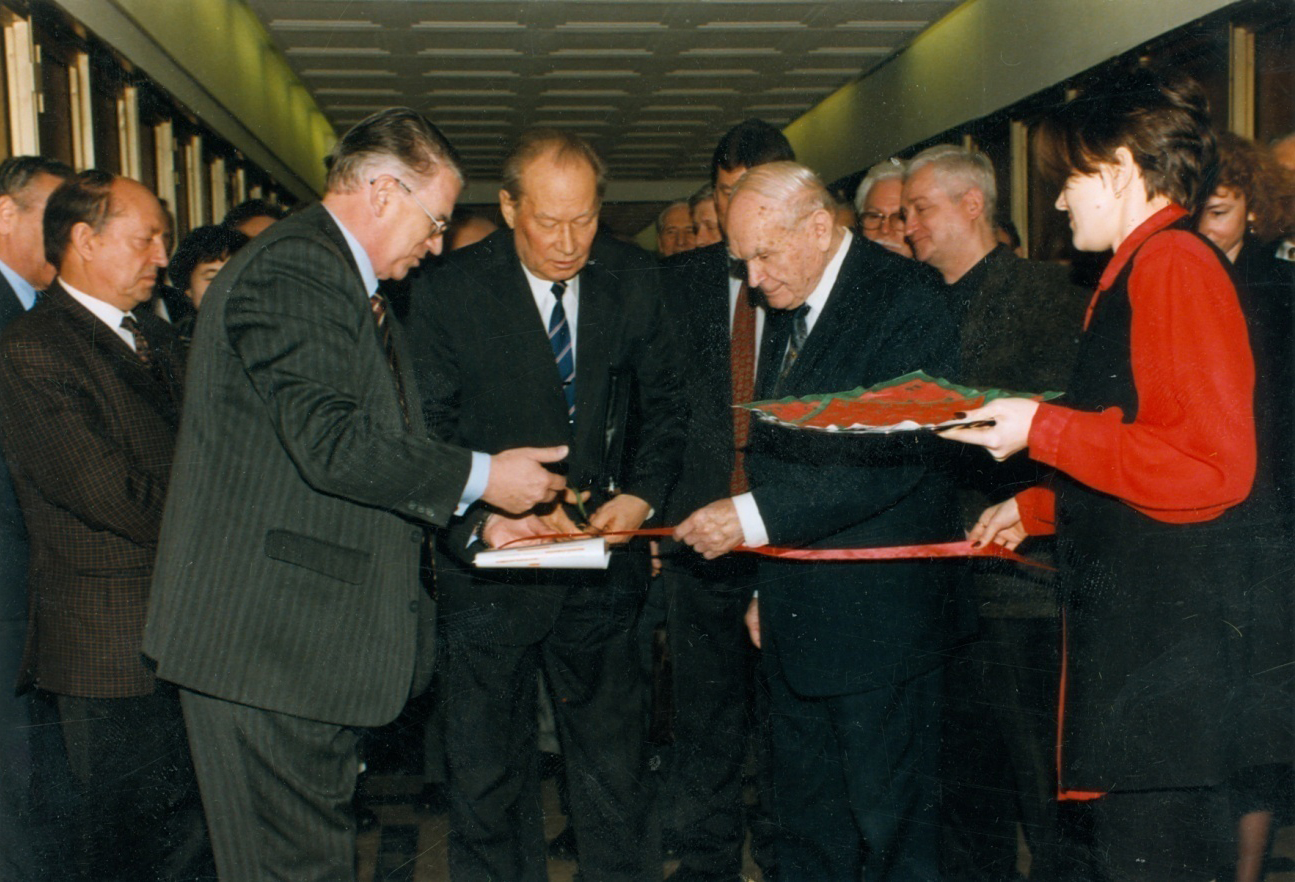 The University became a recognized center of interaction for scientific and technical staff involved in the oil and gas industry. Annually up to 15 scientific and scientific-technical conferences were held at the University such as “Gubkin Readings”, “Current Problems of the Oil and Gas Complex of Russia”, and the congress “Defense”, which brought together scientists from Russia and foreign countries. 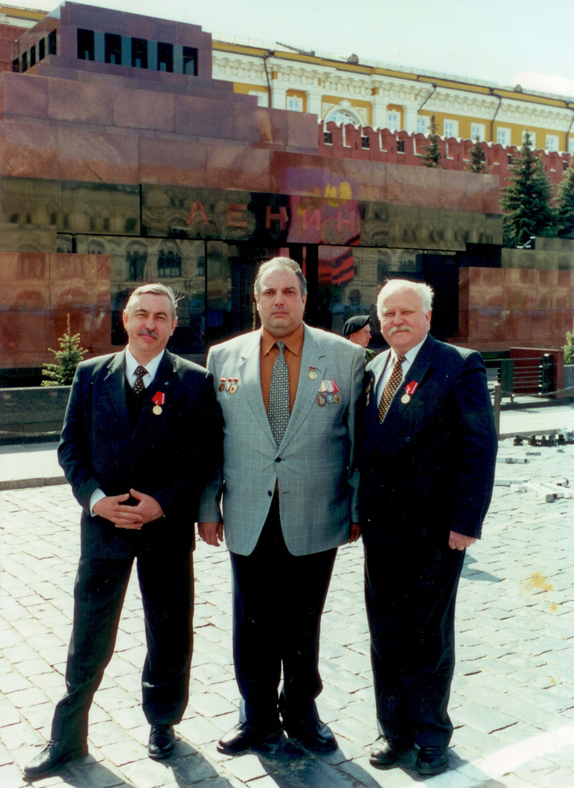 At the turn of the century, the University included 59 departments. 931 faculty members worked for the University, including 27% of professors, doctors of sciences, 44% of associate professors, candidates of sciences, as well as five academicians and corresponding members of the Russian Academy of Sciences, over 100 active members and correspondents of various sectoral and intersectoral academies, whose teaching and research activities were closely related to sectoral science and industry.

During these years, the representatives of more than 55 countries became students and graduates of the University. Highly appreciating the assistance of the University in training specialists and developing the oil industry, the Government of the Socialist Republic of Vietnam awarded in 2000 the Order of Friendship to Gubkin Russian State Oil and Gas University. 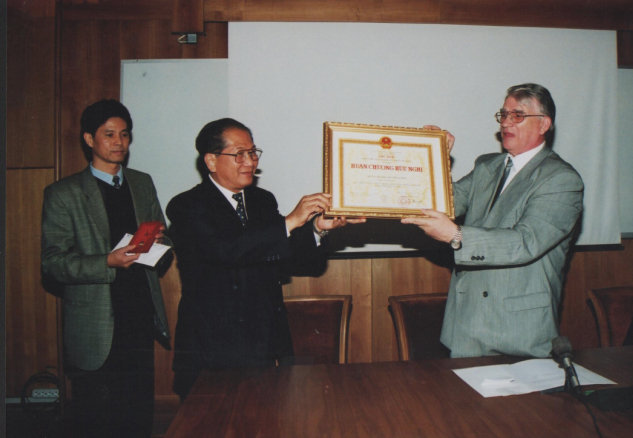 Awarding the Order of Friendship of the Socialist Republic of Vietnam to Gubkin Russian State Oil and Gas University, 2000. 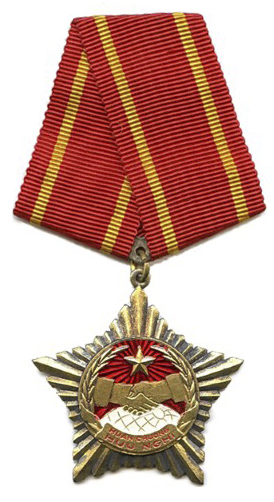 On 17 April 2000, Gubkin Russian State Oil and Gas University celebrated its 70th anniversary. The student trade union committee proposed to celebrate henceforth the birthday of the University annually on 17 April, and call it Gubkin Day. The Academic Council supported the initiative. Since 2001 Gubkin Day has become the most significant event in the life of Gubkin University students. 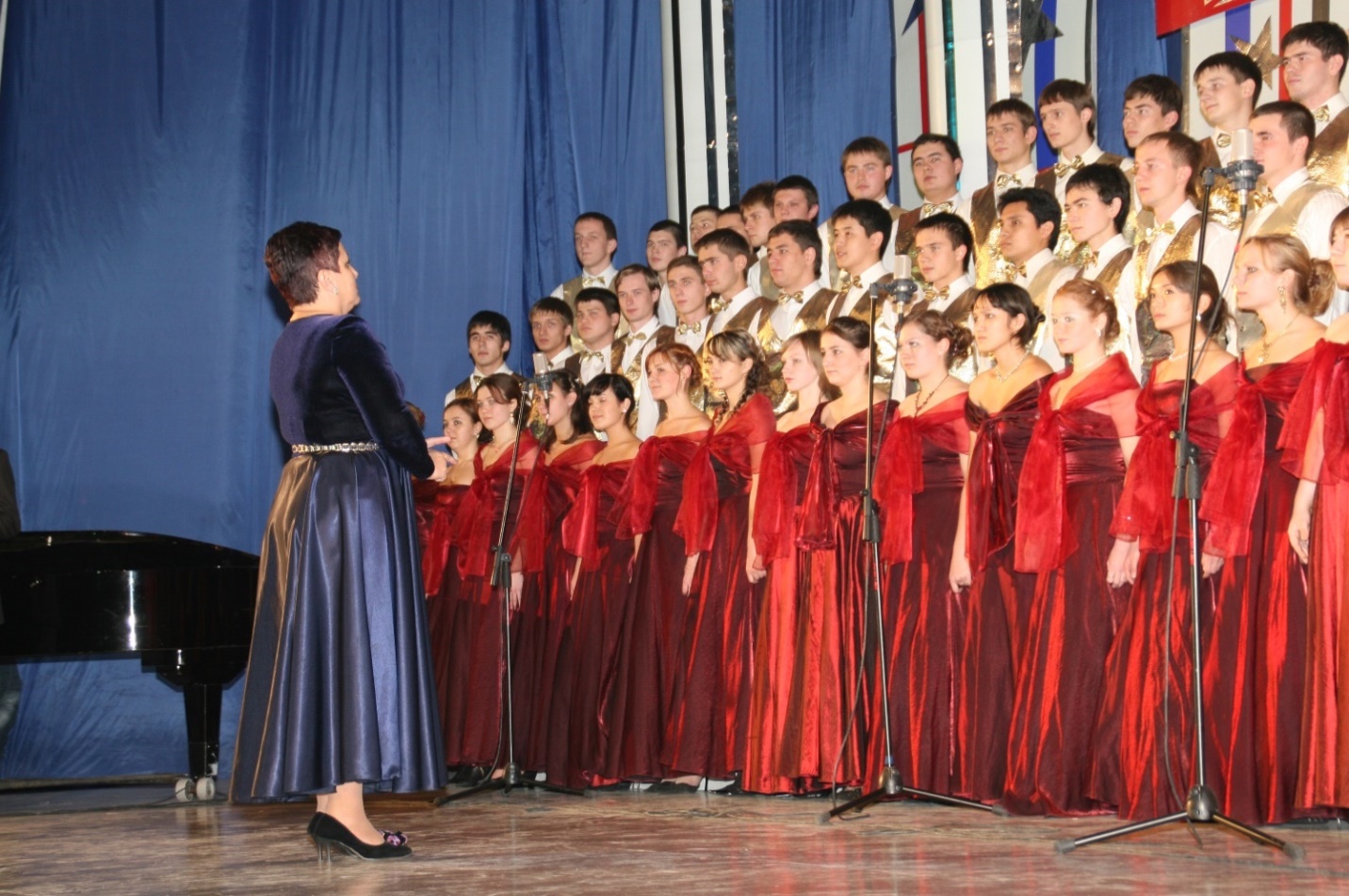 Anthem, written by Yu.L. Greenstein, was first performed by the choir of the Faculty of Oil and Gas Field Development (leader and conductor Professor E.N. Paliy) at the meeting of the Academic Council dedicated to the 70th anniversary of the University.

"Your university is a powerful center of national science, a true talent foundry for Russian oil and gas industry. Over the past seven decades, a brilliant community of scientists and faculty members grew up here, who trained over 70 thousand specialists for the country… Gubkin University diploma is respected and recognized far beyond the borders of the country... I have no doubt that your university will continue to keep its glorious traditions, and its graduates will honestly serve Russia"

– message of the President of the Russian Federation Vladimir Putin 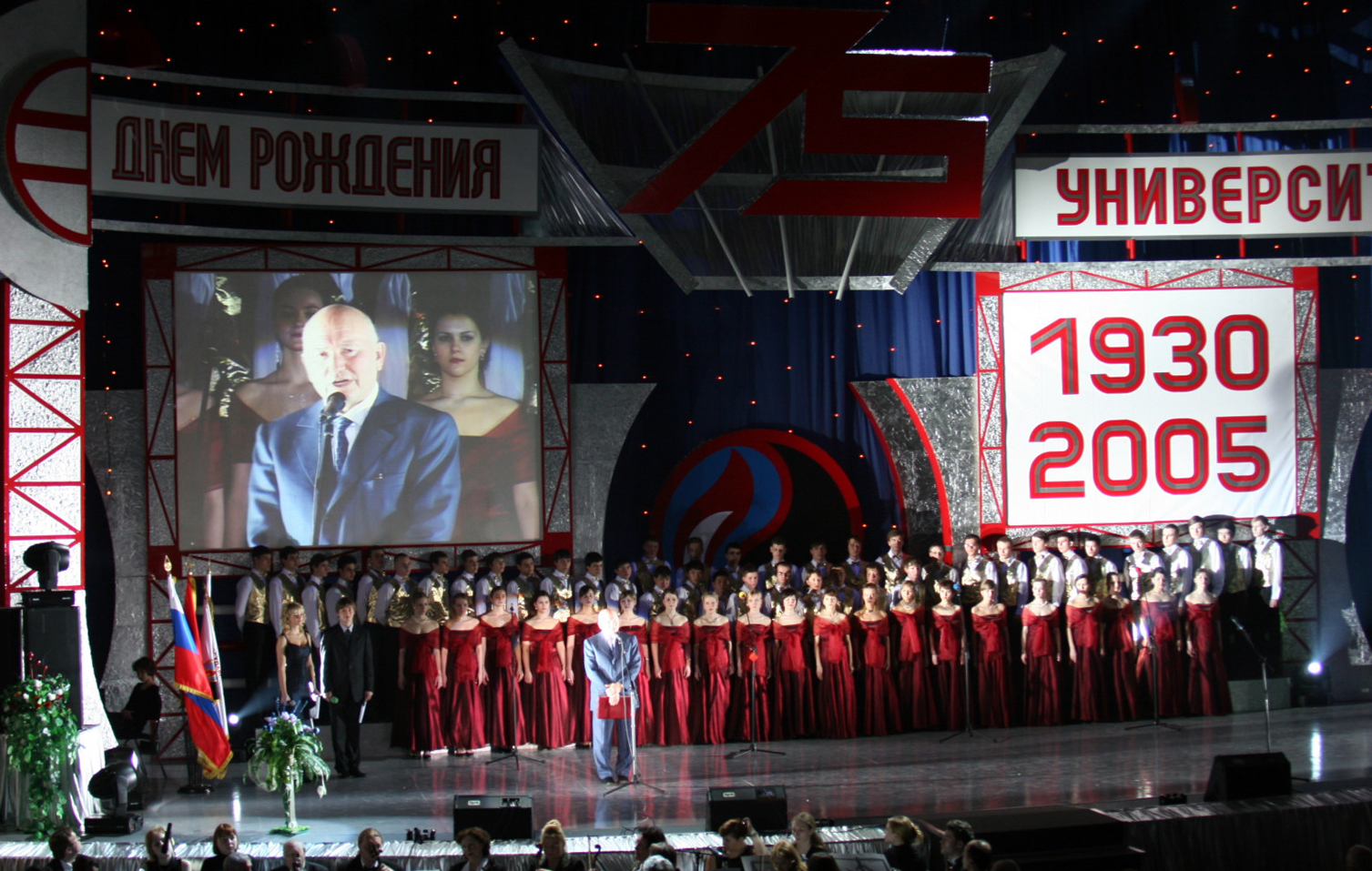 Honorary graduate of Gubkin University, Moscow mayor Yu.M. Luzhkov at the celebration of the 75th anniversary of the University.