The years of the War became one of the most difficult periods in life of the Institute. The War, in accordance with the directive of the Council of People's Commissars of the USSR of 30 June 1941, demanded from the faculty and staff members of the Institute a great deal of effort, aimed at defending the homeland, continuing the educational process in the conditions of evacuation, conducting research, developing new technologies for exploration, development, processing and transportation of oil and oil products.

In 1941, 217 students graduated from the Institute. However, the faculty and staff members, students of Moscow Oil Institute went to the front, both at the mobilization order and as volunteers. The rest erected defensive lines around Moscow. In early July 1941, about 300 students left for the construction of facilities in the Smolensk region. Those remaining in Moscow were confined to barracks. The workshop units of the Institute started to produce anti-tank grenades. 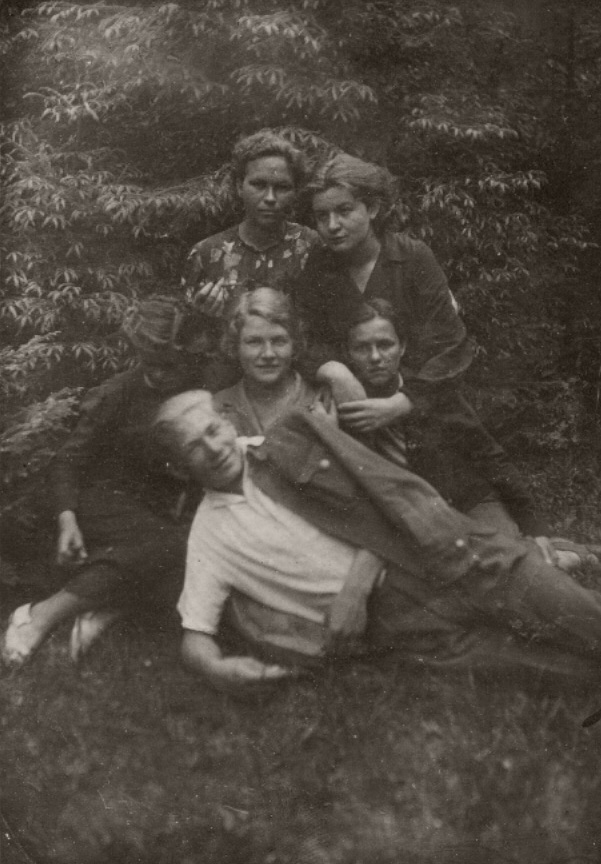 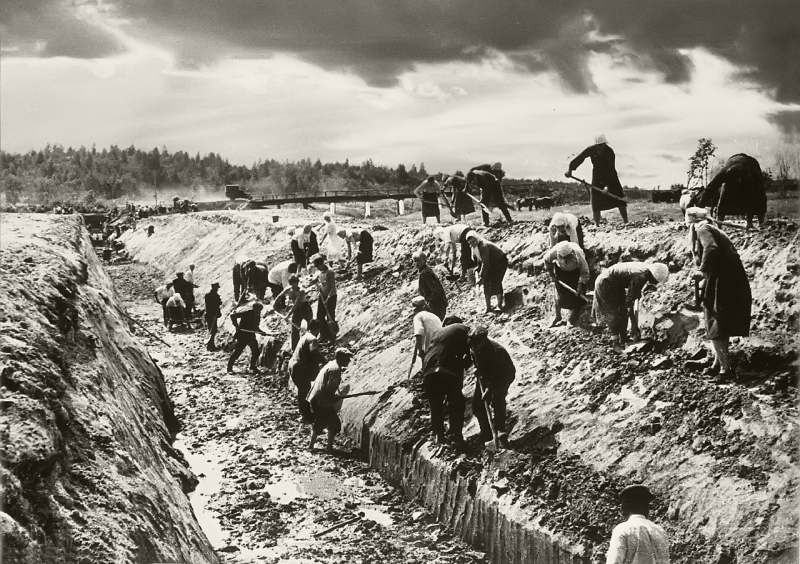 The construction of the anti-tank ditch. 1941. 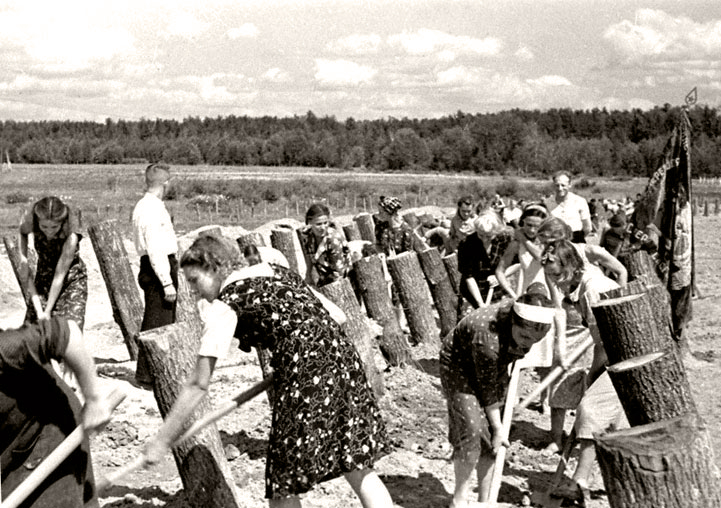 The construction of wooden anti-tank defense installations on the approaches to Moscow. 1941 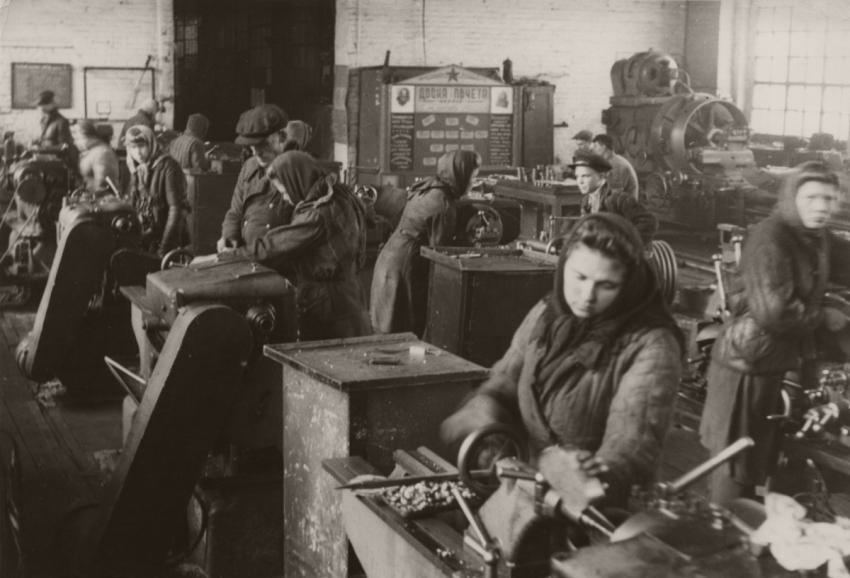 The War influenced the lives of many students and faculty members, who saw active service near Moscow, defended Stalingrad and defeated the Paulus’ Army, freed Poland, took part in the battle for Berlin. Among student volunteers who fought heroically were S. Voznesensky (died), M. Faytekh (died), V. Delektorsky (went missing), A. Charygin, V. Khmyrev, V. Znamensky, N. Ruleva, E. Erman, G. Volkman and many others. Most of the volunteers did not return. 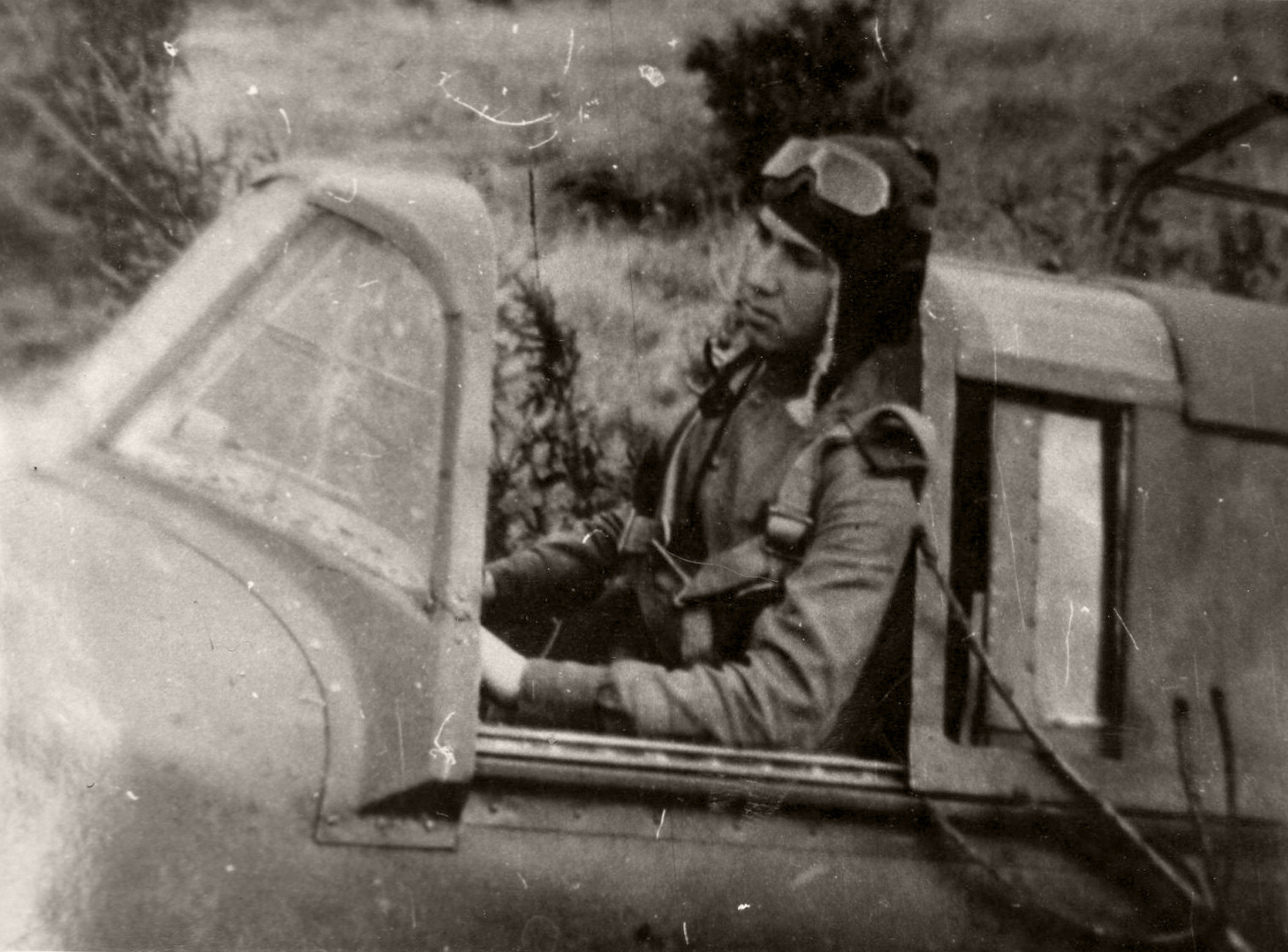 “The craftsman of surgical strikes” – Hero of the Soviet Union N.E. Olovyannikov 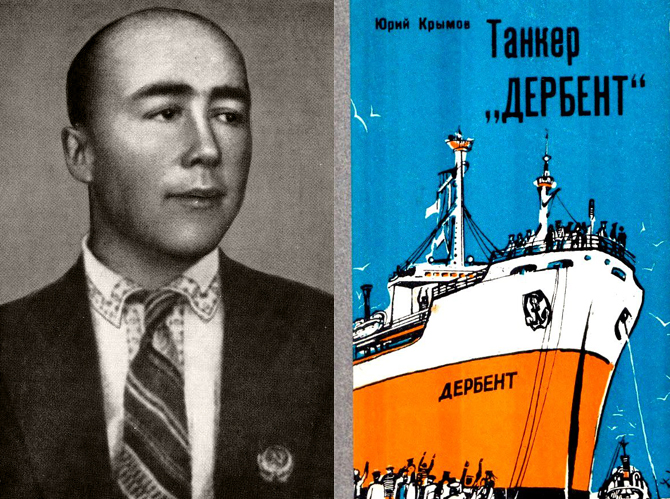 Yu.S. Beklemeshev (Krymov), the research associate of Moscow Oil Institute, the inventor of the dehydration unit, the famous writer and war journalist, who died in September 1941.

V.F. Solovyov, the graduate of the Faculty of Geology of Moscow Oil Institute, who fought in the partisan detachment of D.N. Medvedev. After the war V.F. Solovyov became the head of geological expeditions of the Institute of Oceanology of the USSR Academy of Sciences

In October 1941, Moscow Oil Institute was evacuated to Ufa where students and faculty members moved as well. There was no laboratory equipment, no furniture.

Severe frosts in 1941 and 1943, when the air temperature dropped to 40-50 degrees below zero, became a part of history. Railway tracks at Chernikov Station were covered with one and a half meters of snow. Trains with the wounded from the front and oncoming trains going to the front could not move. Tanks with fuel from the Ufa plant and wagons with tanks from the Chelyabinsk plant could not leave for the Belarusian Front. Students and faculty members were involved in tracks clearing. They worked until dawn, and in the morning, when trains began to move through the snow, they went back to classrooms, tired, with frostbitten faces and hands. 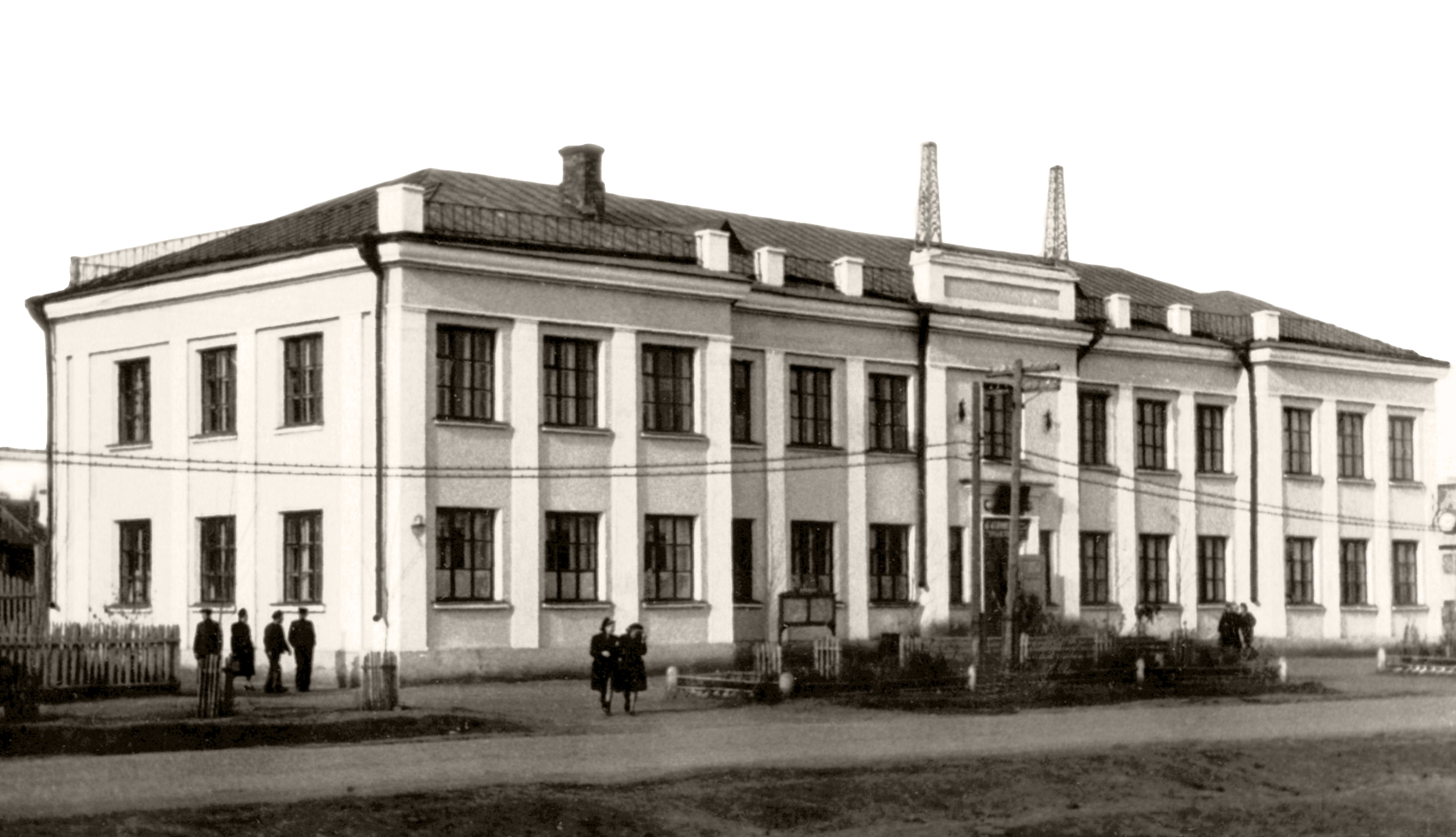 “In the evening of 16 October, huge columns of Muscovites – workers, students – moved to Shosse Entuziastov. To Kaluzhskaya Square, and then to Korovy Val, Taganskaya Square, through Krestyanskaya Zastava and Zastava Iliycha, columns of institutes – our Institute, Mining Institute, Institute of Steel, Krasniy Proletariy factories and others – a whole mass of people. There was a strong raid by German aviation, the sky was blazing, and people, cars, bicycles and carts kept moving to the only free highway. The main points of the route were determined for us: we had to take the train in Vladimir to Gorky, gather at Gorky Oil College, then go along the Volga to Kuibyshev; the point of destination for all departed students and employees of the Institute was in Ufa. The way from Gorky to Ufa was organized somehow, and someone had to reach Vladimir on foot, someone, including our ladies were able to pick up passing cars. But the main thing was in the fact that a new, military life of the Institute started in Ufa”. 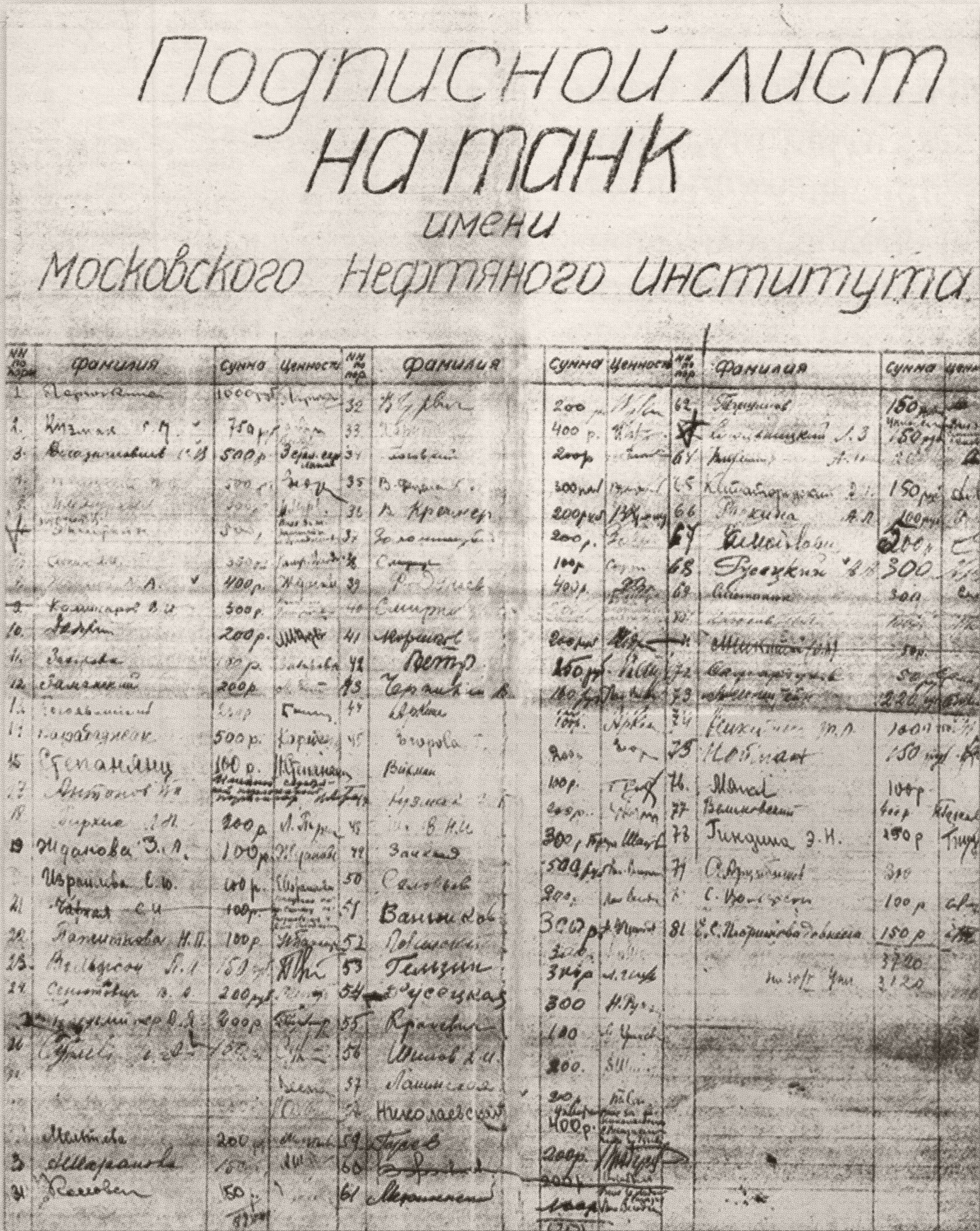 In October 1942, the faculty and staff members of Moscow Oil Institute contributed to the construction of a tank named after I.M. Gubkin.

Students who were called into the army were partially filled up by students from other universities who were evacuated to Ufa. The demobilized war veterans returned. V.N. Vinogradov, who volunteered to go off at the front in the fall of 1941, was seriously wounded, and had to abandon the profession of a geologist after the hospital, and entered the Faculty of Petroleum Engineering, established in 1943. Later he became a professor, a doctor of technical sciences, the first elected rector of Moscow Institute of Petrochemical and Gas Industry named after Ivan Gubkin. B.K. Proshlyakov became a doctor of geological and mineralogical sciences, professor, dean of the Faculty of Gas and Oil Geology and Gas Chemistry; N.N. Koshelev – a candidate of technical sciences, associate professor, head of the Department of Production of Gas and Oil Processing Equipment and Hot Metal Working, dean of the Faculty of Mechanics; V.V. Znamensky – doctor of geological and mineralogical sciences, professor of the Department of Field Geophysics, laureate of the USSR State Prize. 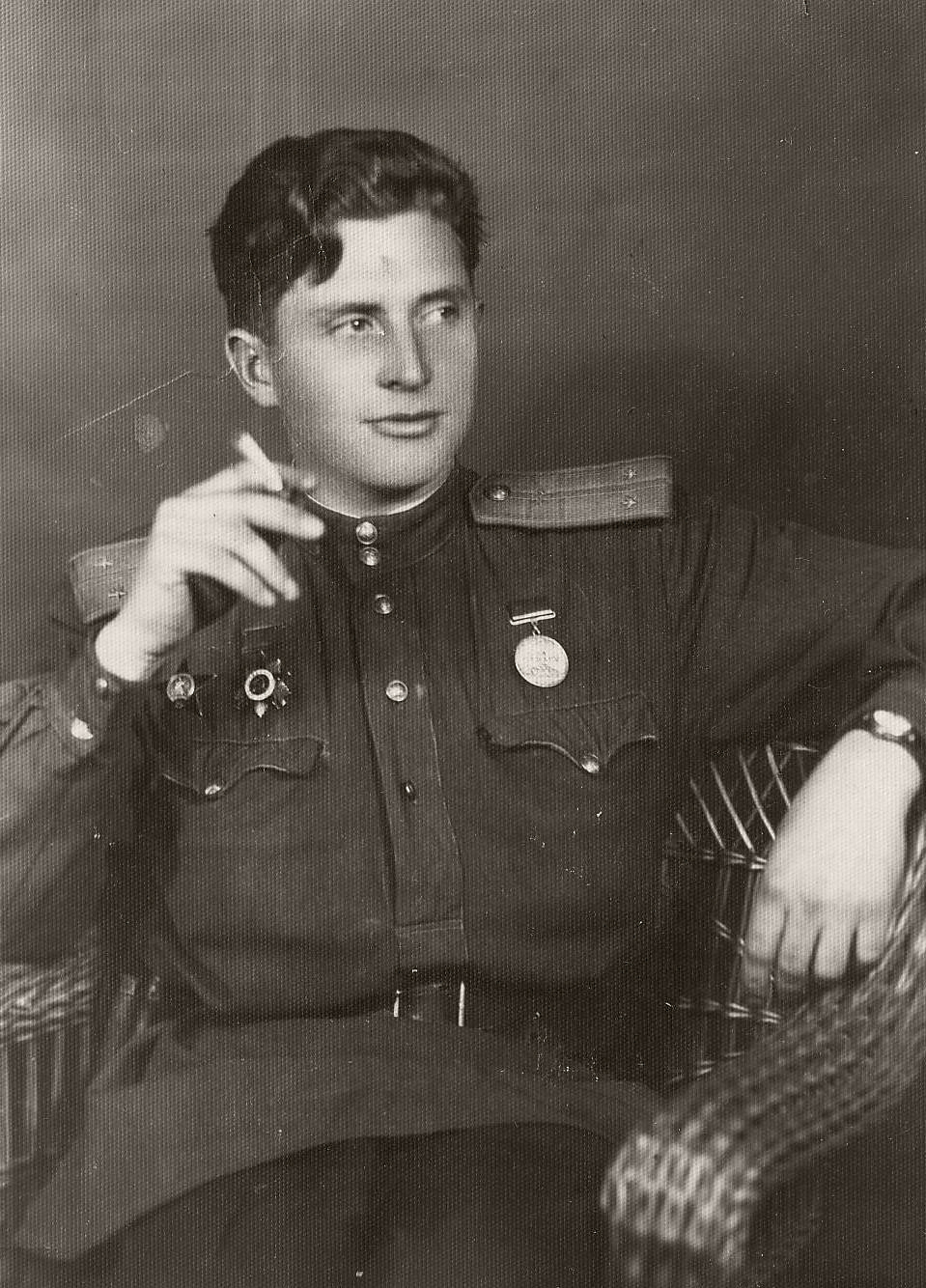 N.N. Koshelev. Pilot-navigator of a military fighter plane. After the war – Dean of the Faculty of Mechanics. 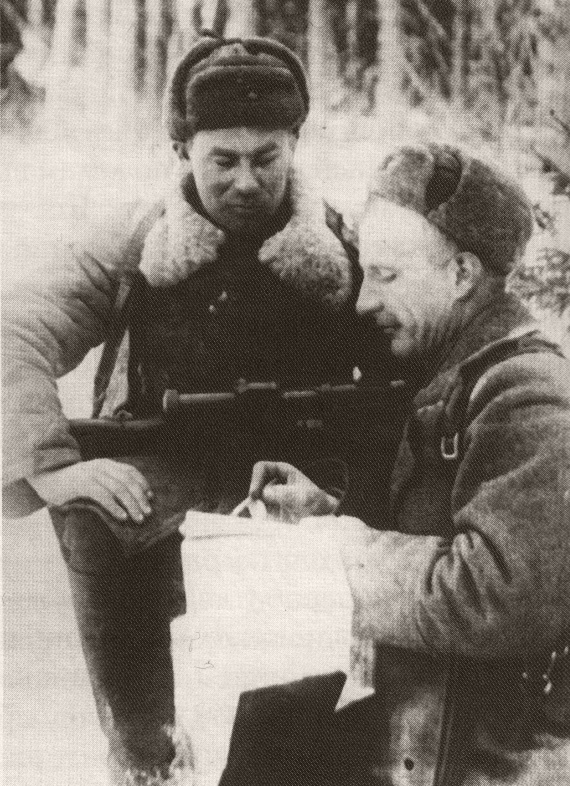 I.A. Konyukhov, postgraduate student of the Department of Petrography of Moscow Oil Institute at the front. 1941. 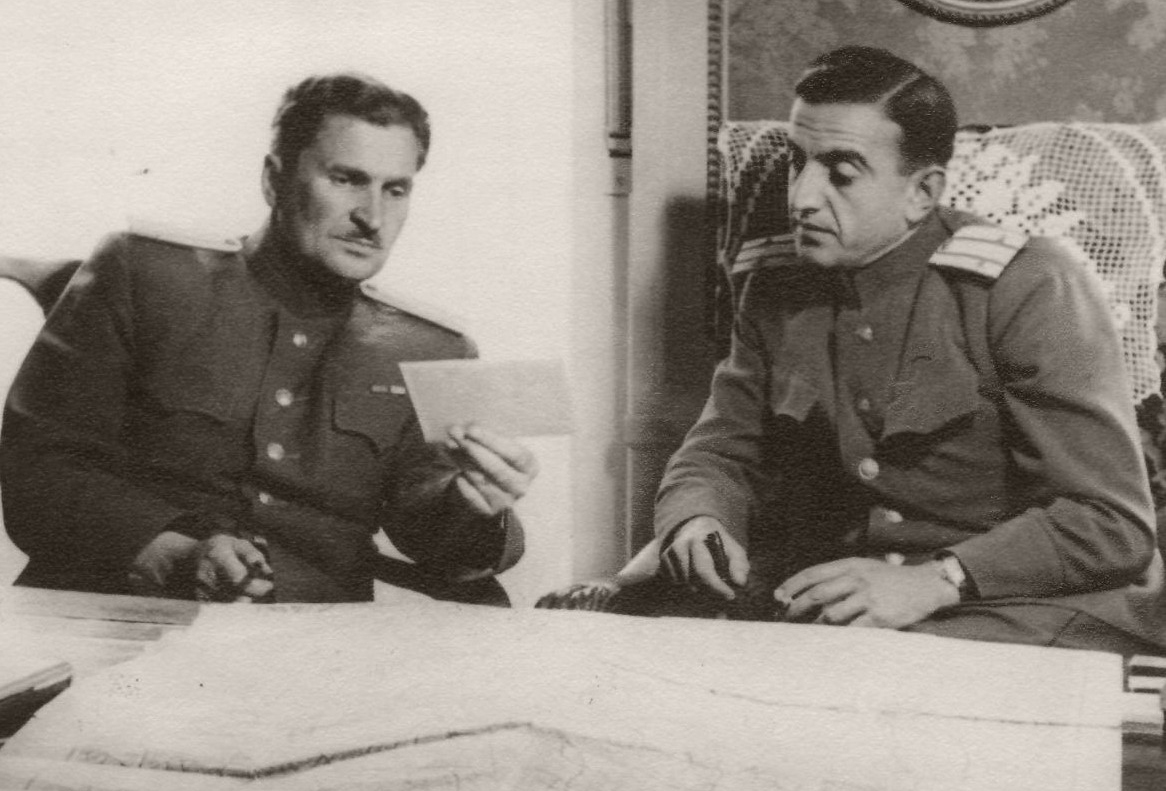 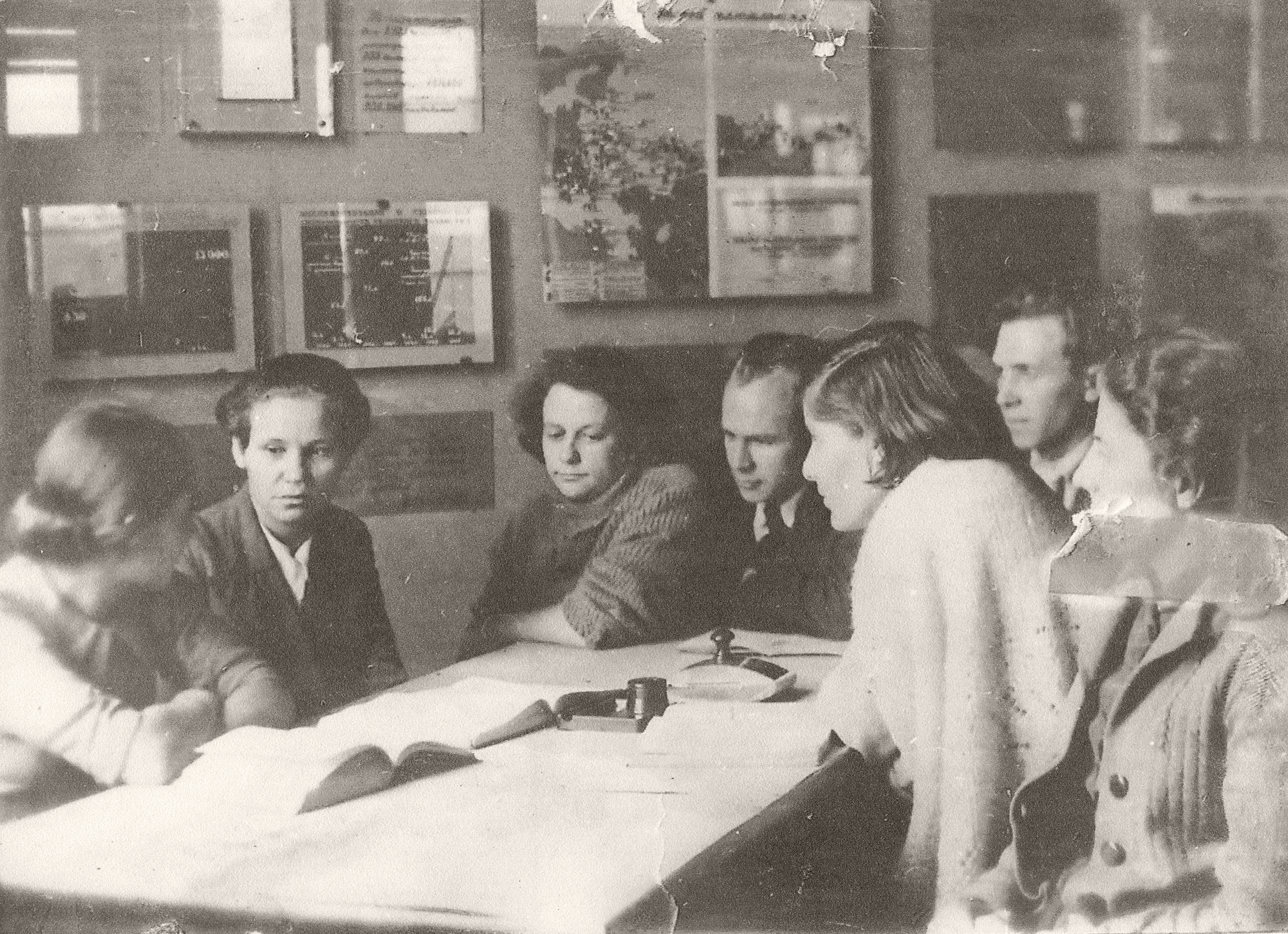 In May 1943, the Institute was re-evacuated back to Moscow, and its branch remained in Ufa, where in 1948 Ufa Oil Institute was established. 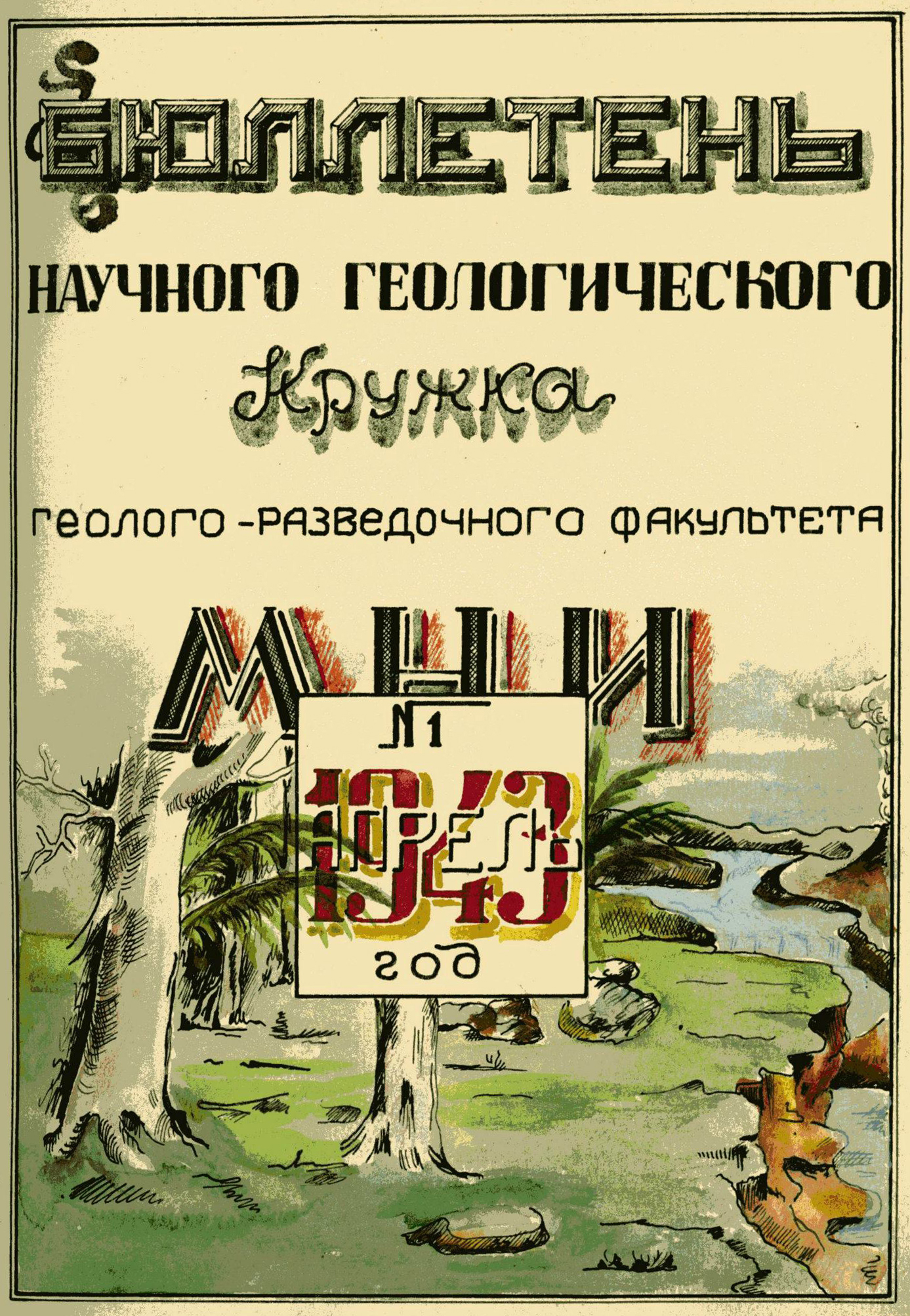 Bulletin issued by the student scientific team of the Faculty of Geological Exploration. Ufa, 1943. 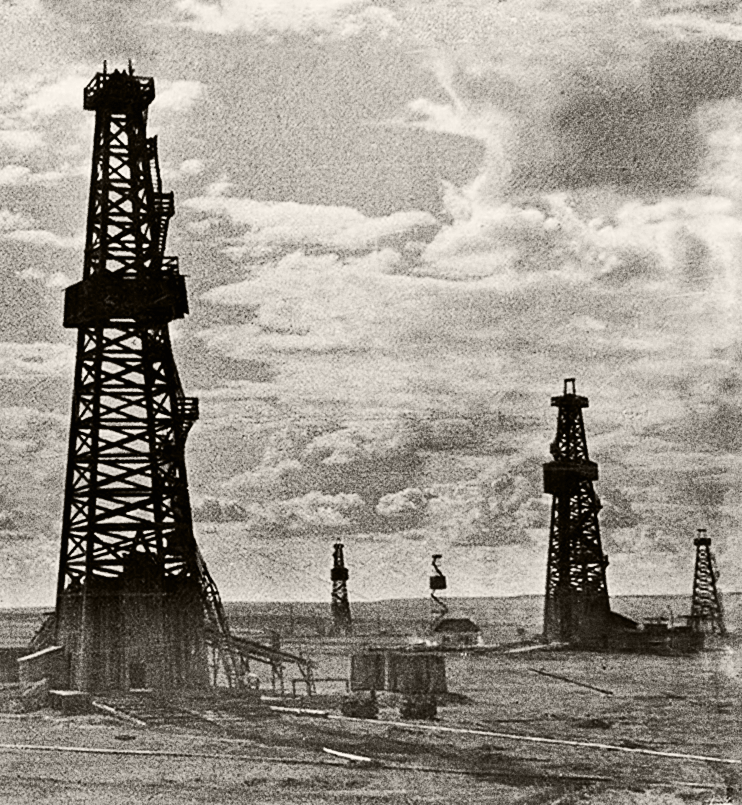 During the War years, a number of oil and gas fields were discovered, many inventions were introduced into production with the participation of scientists from the Institute. Among the largest discoveries of wartime was the production of high-rate oil from the Devonian sediments of the Volga-Ural oil and gas province. It was the Devonian oil of the Tatar Autonomous Soviet Socialist Republic and the Perm region that subsequently brought the Volga-Ural region (“Second Baku”) to the first place in the country. In 1946, a group of oil scientists, including academicians L.S. Leibenzon and S.S. Nametkin, professors V.M. Senyukov, E.I. Tagiev, Ya.M. Kershenbaum, was awarded the USSR State Prize for this outstanding discovery, which confirmed the scientific prediction of the Academician I.M. Gubkin. The discovery of a large gas-bearing Saratov area became of great importance. 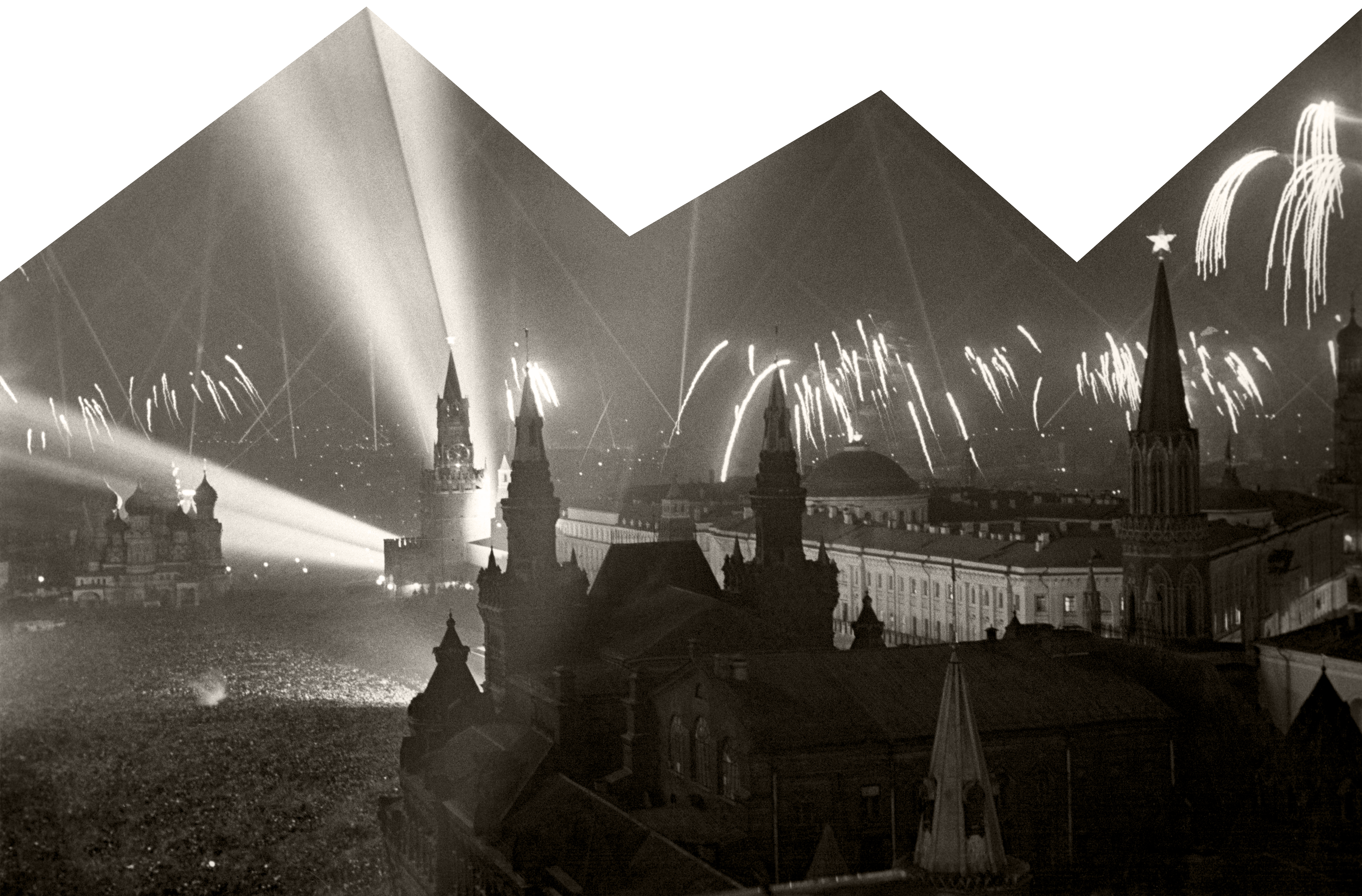 During the War years, Moscow Oil Institute increased its scientific and pedagogical potential. About 300 engineers were trained at the Institute. 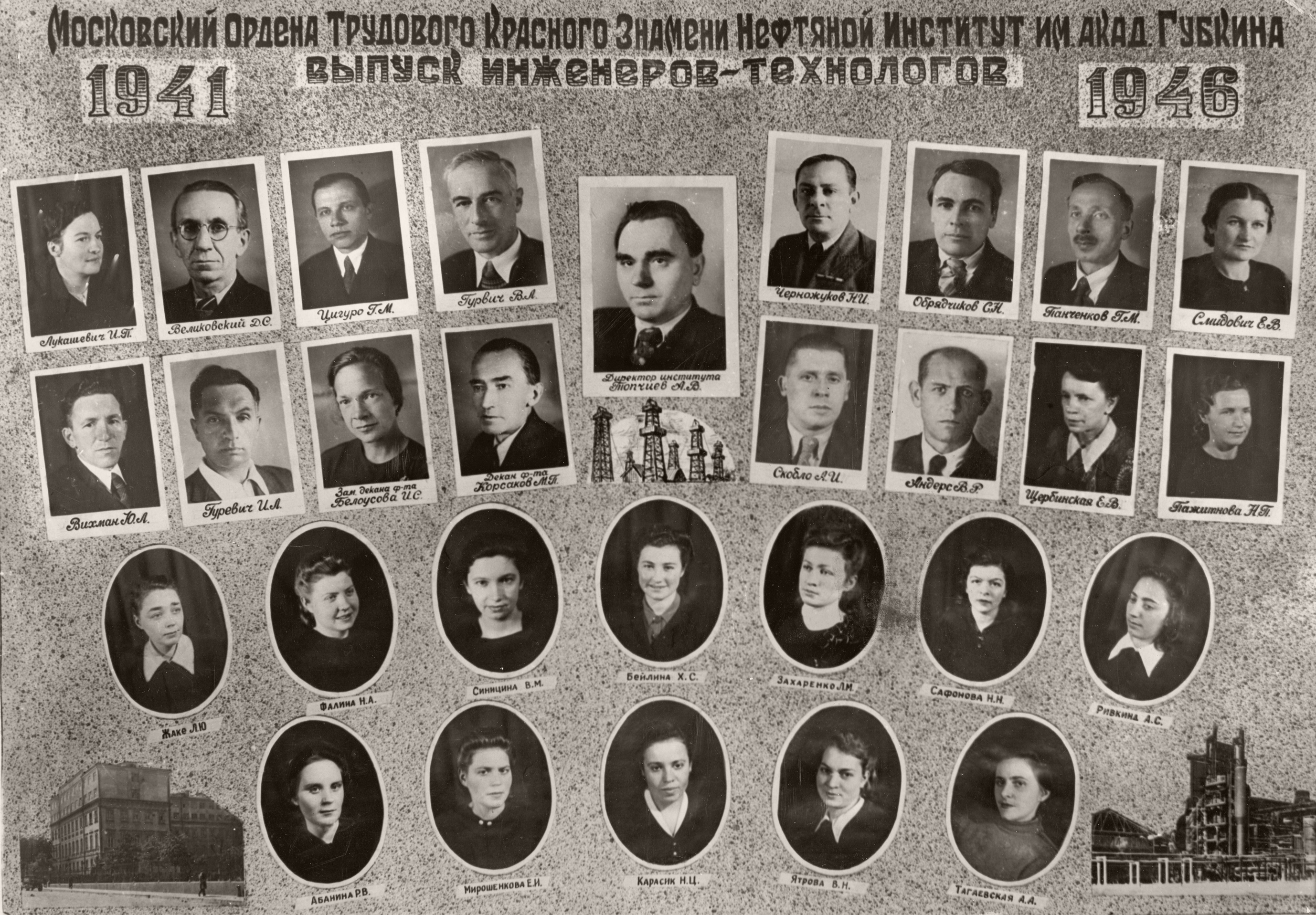 The work of the staff during the War was highly appreciated. For successful completion of the government tasks related to training of engineering and technical personnel and in celebration of the 25th anniversary of the Institute, by the Decree of the Presidium of the Supreme Council of the USSR of 26 May 1945, Moscow Oil Institute received the Order of the Red Banner of Labor. 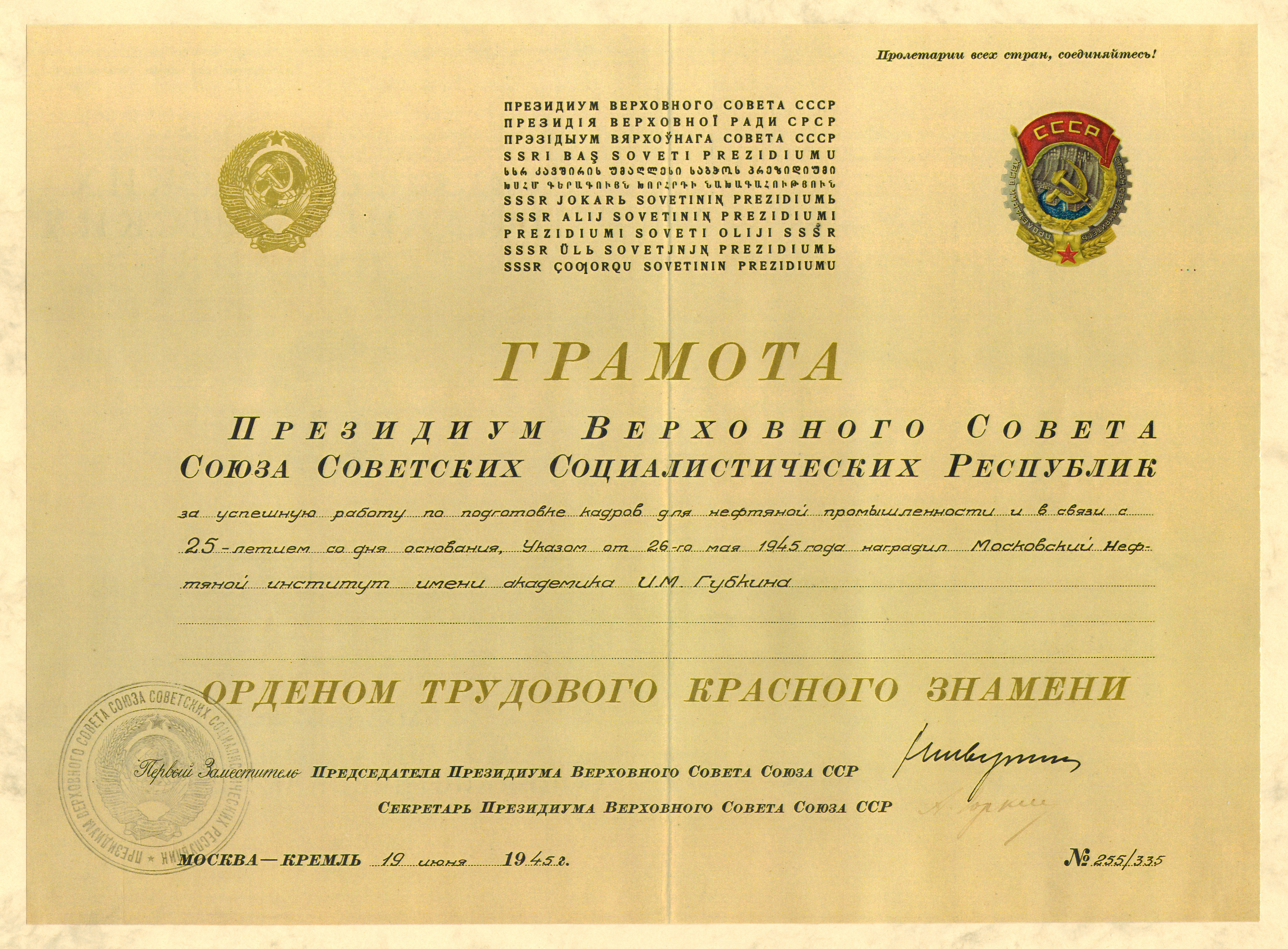 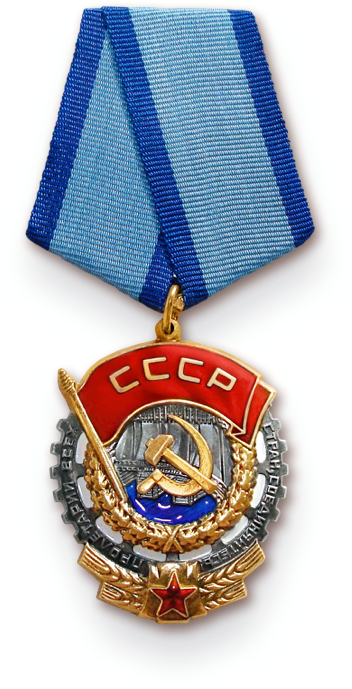 Staff members of the Institute, awarded orders and medals of the USSR in honor of the 25th anniversary of oil education in the country. Moscow, Kremlin, 1945.